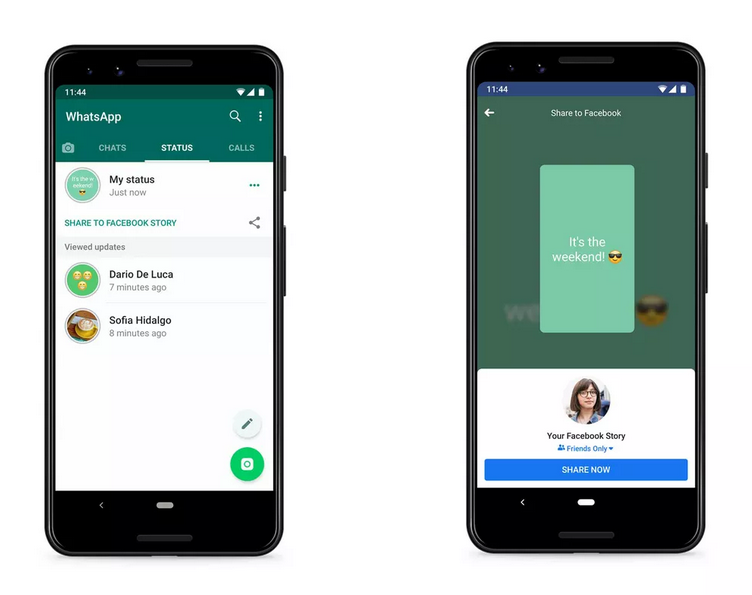 WhatsApp Status; a Stories-like feature launched by the Facebook-owned messaging app over two years ago will soon welcome a new function. Apparently, this is one of many ways the owners of the app think will make the feature more popular among users. According to WABetaInfo, a well-known and respected tech blogger, you will soon be able to share your Status to Facebook and other apps.

The feature was spotted and reported by WABetaInfo a couple of months ago, but the latest we have on that is from The Verge. Users that have signed up with the WhatsApp beta program will start seeing a new sharing option underneath their status. The new sharing option will let you share or post a status directly to your Facebook story or send it to another app like Google Photos, Instagram or Instagram.

The direct link to share your status to Facebook notwithstanding, WhatsApp has assured that both [Facebook and WhatsApp] are not being linked. Per The Verge’s John Porter, WhatsApp said what it is doing is not different from what other iOS and Android-sharing APIs are currently doing. All shared status will be treated as separate events in Facebook’s systems, and they won’t be linked. Status on WhatsApp will be shared solely at the user’s discretion, and won’t be automatic.

Last time out, we told you that ads were coming to WhatsApp. This has been the worst kept secret, and we all knew it was only a matter of time before we start seeing ads on WhatsApp. This could probably be the biggest threat to people’s privacy on the app because. That said, there are reports suggesting that Facebook is bringing ads to its messaging app—WhatsApp via Status.

In case you didn’t know, Status is WhatsApp’s version of Stories—a feature that disappears 24 hours after a user posts a content. Ads will appear in the WhatsApp Status update section against the wishes of millions of users.

Ads, however, won’t start showing until 2020; so, it is safe to say that we have a couple of more months to enjoy the app without being worried about seeing those annoying ads. While it is not immediately known what kind of data will be used to target ads at WhatsApp users, users are of the view that they could pose serious threats to their privacy and security.

There are chances that ads on WhatsApp Status could appear the same way as they do on Instagram Stories—in-between. When they appear, users will be able to click on them from where they will be taken to the advertiser’s website.