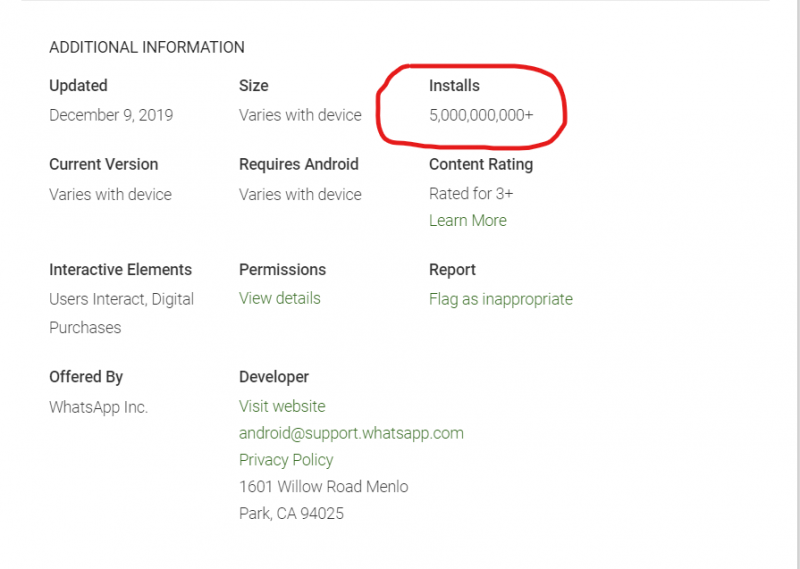 Facebook-owned messaging app WhatsApp has hit 5 billion plus installs on the Play Store—and this is not coming as a surprise considering the Facebook factor. The story of the app has been one of success from the very first time it burst into limelight in 2009.

Facebook is the only other app besides Google’s preinstalled app that comes with Android phones that has been able to cross the 5 billion plus install on the Play Store. This new milestone confirms WhatsApp as the second most popular app among all apps owned by Facebook.

Instagram and Messenger both have 1 billion plus downloads on the Play Store, while WhatsApp Business launched in 2019 is far behind with 100 million installs. With over 1.5 billion monthly users, WhatsApp remains the undisputed king in terms of the most used messaging app in many countries around the world.

Citing inside sources, the Wall Street Journal reported last week that WhatsApp recently disbanded a team that was earlier put in place to find the best ways to integrate ads into the messaging service. Work already done by the team has been deleted from the WhatsApp code, the people said per WSJ. This piece of news was greeted with relief especially as all but confirmed the fact that ads may not be coming to WhatsApp—at least not now.

Created in 2009, WhatsApp made money initially from download fees and then a $0.99 annual subscription, but Facebook made the platform free after acquiring it. In 2018 Facebook unveiled plans to generate more revenue from the app that included selling ads.

Facebook immediately made the use of WhatsApp free which was previously accessible at $0.99 annually free for everyone. This led to a lot of speculations as to whether or not the service would continue to be free considering the huge amount of investment put into it by Facebook at the time of acquisition.

Facebook completed the $19 billion acquisition of mobile messenger app, WhatsApp in 2014. The deal saw Facebook pay $12 billion of its stock value, and another $4 billion, with founders of the app also granted $3 billion Facebook stock; while the app continues as a separate service from the social network giant.

The deal which was initially kicked against by some European telecoms companies, got approval from the EU Commission not long after formal acquisition, declaring that both companies were not ‘close competitors.’ The Commission also gave its approval based on the fact that consumers will still be left with a choice of applications to choose from.

At the time, Facebook founder Mark Zuckerberg said the company was only concerned about growing WhatsApp’s user base. He emphasized that monetization was a priority. “Our strategy is to grow and connect people. Once we get to 2-3 billion people there are ways we can monetize. Now we want to focus on growing users. I don’t think ads are the right way here.”