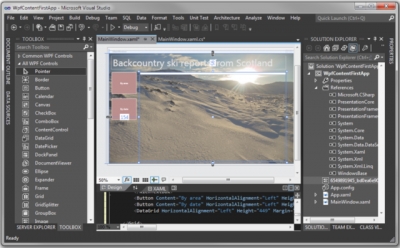 The launch of Windows 8 Beta, scheduled for February 29 will be simultaneous with the disclosure of the preview version of Microsoft’s Visual Studio 11. The new elements aim the interface and the way of using the platform, together with a number of changes on Team Foundation Server 11.

Visual Studio 11 brings many improvements, both for common tasks and for software creation. First of all, the new version has a better indexing process for finding information easier.

Design is also a big surprise: while Visual Studio 10 is abundant in color, the new version is mostly gray, for a better focus over the text.

Surprisingly, Microsoft has also announced the limited version of Team Foundation Studio, named TFS Express, which will be available for download and used for free by up to 5 people. In addition, the quick version connects only to SQL Server Express, is installed on a single server and does not have TFS Proxy or the Preemptive analytics add-on.

Visual Studio 11 and TFS 11 will be available starting from February 29 in the Consumer Preview version, along with Windows 8 Beta.