Yingluck Shinawatra, Thailand’s first female prime minister, had her Twitter account hacked last weekend, and now police have arrested the culprit, a 22 year old student named Aekawit Thongdeeworakul, who is, or was, finishing up his fourth year at the prestigious Chulalongkorn University. 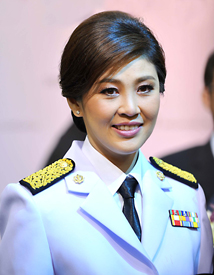 The hacker admitted to breaking into the Prime Minister’s Twitter account and posting a series of insulting messages about her performance since she was appointed on August 5th by King Bhumibol Aduladej, on the advice and consent of President of the National Assembly Somsak Kiatsuranont.

Yingluck, the younger sister of exiled former Prime Minister Thaksin Shinawatra, was nominated by her Pheu Thai Party as their candidate for Prime Minister in May for the 2011 general elections. For just the second time in Thai history a single party won more than half of the seats in the general election when the Pheu Thai party won 265 of the 300 seats in Parliament.

Given the negative tweets made by Thongdeeworakul after he hacked PM Yingluck Shinawatra’s account, he is probably not a member of the Pheu Thai party.  Thongdeeworakul made a series of negative posts about Yingluck’s leadership, ending with this: “If she can’t even protect her own Twitter account, how can she protect the country?”

Thongdeeworakul, wearing dark sunglasses and a baseball cap, appeared before a press conference, along with ICT Minister Anudith Nakornthap, who told reporters the Chulalongkorn University student did not understand the seriousness of his actions, that he did not think “it was a big deal.”  The events leading to his hack attack on the Thai PM began with another hack of Yingluck’s Gmail account on September 30th. This information was subsequently spread throughout the computer underground, and Thongdeeworakul gained access to it and used it to hack her Twitter account.