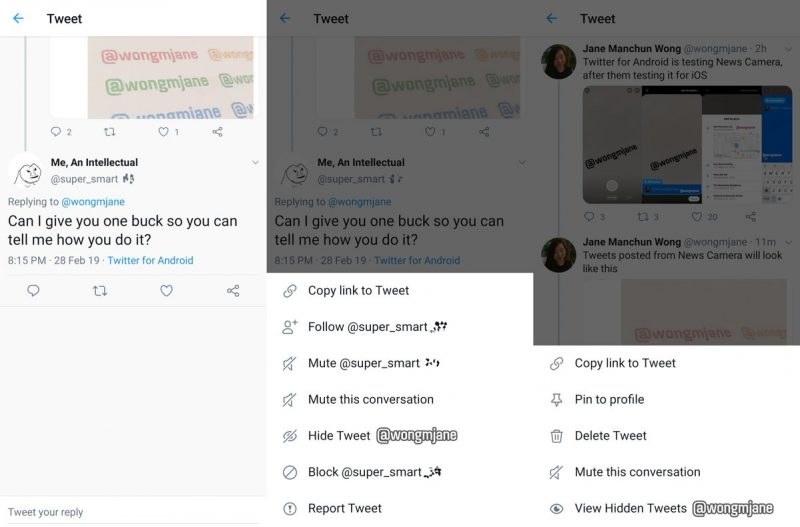 Twitter has confirmed per TechCrunch that it is working on a new “Hide Tweet” feature that will give users another option to protect their conversations. The feature was first spotted in a Twitter code, and is available from a list of moderation choices that appear when the “Share” button on a tweet is clicked. The “Hide Tweet” feature works as an alternative to muting or blocking a user; though it still gives you the option to control a conversation.

The option to hide tweet was first spotted by reliable reverse engineer Jane Manchun Wong. The option according to Wong, also gives you the chance to show the hidden tweets.

More than anything else, the real reason why Twitter is working on this feature is so that your conversations can be protected. Twitter Senior PM Michelle Yasmeen Haq in a series of post, explained more:

People who start interesting conversations on Twitter are really important to us, and we want to empower them to make the conversations they start as healthy as possible by giving them some control.

We think of conversations as an ecosystem of different groups: authors, repliers, the audience and the platform. We try to balance the experience across all four groups, and we are continuously exploring ways to shift the balance without overcorrecting.

We already see people trying keep their conversations healthy by using block, mute, and report, but these tools don’t always address the issue. Block and mute only change the experience of the blocker, and report only works for the content that violates our policies.

With this feature, the person who started a conversation could choose to hide replies to their tweets. The hidden replies would be viewable by others through a menu option.

We think the transparency of the hidden replies would allow the community to notice and call out situations where people use the feature to hide content they disagree with. We think this can balance the product experience between the original Tweeter and the audience.”

She ended her long tweet by announcing that the microblogging platform intends to start testing the new feature in the coming months. So, I guess we might not get to see the feature almost immediately, but it does give us an insight into Twitter’s thinking.

“In the coming months, we plan to start testing this publicly so stay tuned for more and keep telling us what you think!”

Navarra who first spotted the News Feature, also tweeted the screenshot which gives us a preview of what to expect from the new feature. Details are pretty sketchy at the moment, and there is nothing much to the tweet other than the fact that it allows you to add location details, color overlays to photos, videos or live streams.