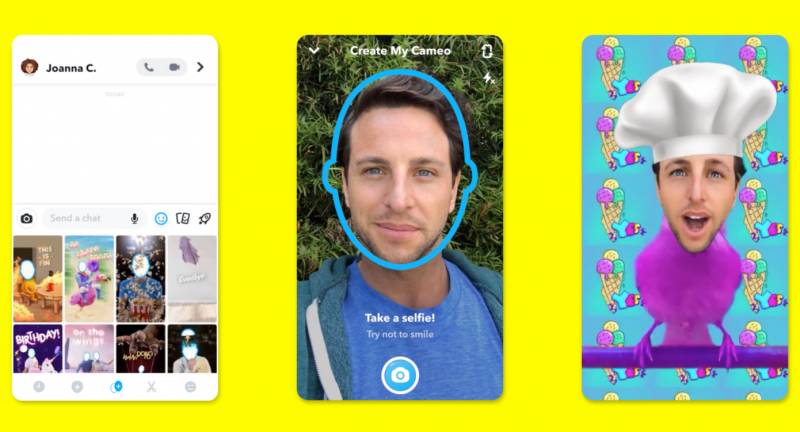 In another week from now, Snapchat would have added another cool new app that will probably just go on and win the hearts of many. Snapchat has confirmed per TechCrunch that it is about to launch Cameos; a new feature that will allow you to use selfies to replace other people’s faces in videos.

18th December has been confirmed as the launch date, and the feature will be available to both Android and iOS users across the globe. Once you have successfully created a video with your selfie by replacing other people’s faces with yours, you can then go ahead to share it.

Cameos is seen as an alternative to Bitmoji because it gives you an opportunity to convey your emotion, or reaction within Snapchat messages. To get started, take a selfie to teach Snapchat what you look like. This will then give you the option of choosing if you want a vaguely male or female body type. Once this is done, Cameo then lives within the Bitmoji button in the Snapchat messaging keyboard.

Cameo is due for official launch by next week as mentioned earlier, and until that time, it is best to wait to see how far the feature can go in attracting and making users stay with Snapchat.

A couple of weeks ago, Snapchat launched a Mix and Match feature that allows you to customize the look of your Bitmojis. The feature is available on both iOS and Android, with Snapchat running a “Bitmoji Merch Sale” that offers 20 percent off on purchases of real-world Bitmoji merchandise.

Mix and Match allows you to select clothing items on Bitmojis or the virtual avatars. What that means is that you can customize the colors of tops, bottoms, footwear, socks, and outerwear of your Bitmoji. All created custom outfits can be stored in your closet that can be equipped any time in the future. At the moment, there are about a billion options of items that you can choose from, and this is expected to rise as time goes on.

Inside the Bitmoji app, you will find new icons for all clothing items that allow you to customize your outfits. This can be done by tapping the fashion icons that opens the “Avatar Designer.” You can also customize your outfits within the Snapchat app—simply tap on your profile icon where you will find “Change Outfit” inside the Bitmoji option. This will open the “Avatar Designer” from where you can continue to tweak your favorite outfits.

Snapchat Mix and Match feature is already rolling out to iOS and Android users worldwide. You can share your first experience using the new feature by using the comment box below.