Samsung To Launch ‘Major’ Galaxy Device on August 15, Could Be Galaxy Note Tab

The brand-spanking-new Galaxy S III is still much warming up the Android market for Samsung after its recent launch but the South Korean consumer electronics giant may soon come out with another “major” Galaxy device: the Samsung Galaxy Note Tab.

Samsung released an invitation to the media saying that it will host a press conference for a “major” and new Galaxy device on August 15.

For those wondering why speculations are that the new Galaxy device will not be the Galaxy Note II, the invitation was sent from Samsung Electronics America and not Samsung Telecommunications America.

This little nuance points to the Galaxy device being a tablet – hence the Samsung Galaxy Note Tab – since the latter Samsung division is the division responsible for smartphones from Samsung.

Furthermore, as we have said earlier, the Samsung Galaxy S III which is currently the flagship smartphone of the Apple archrival is still quite new to the market.

The Galaxy Note II, rumored to feature an even bigger screen that the original Galaxy Note, is expected to be launched some time later towards the end of next month.

Samsung will be holding one of its Unpacked events a day before the IFA expo kicks off in Berlin, Germany.

The original Galaxy Note (Samsung GT-N7000) already had a 5.3-inch Super AMOLED screen which polarized people with some loving it and other thinking it is too much screen for what is considered by Samsung as a smartphone.

The Galaxy Note II is rumored to feature a 5.5-inch display. 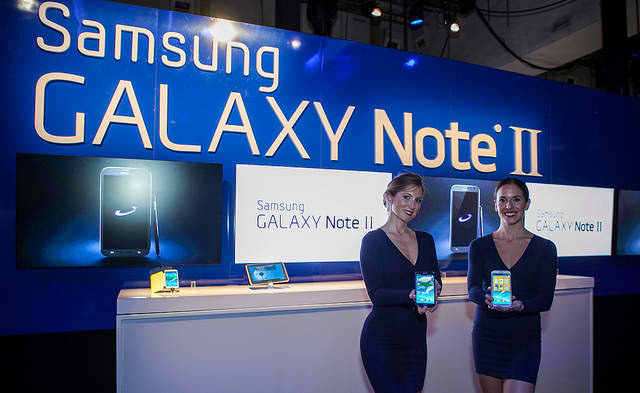 Meanwhile, for those who want to split hairs, the Galaxy Note Tab will be officially called the Samsung Galaxy Note 10.1 tablet.

It is expected to feature a quad-core 1.4GHz Samsung Exynos processor and an HD 10.1-inch display with a resolution of 1,280 x 800 pixels.

The Galaxy Note Tab is also said to feature 1GB of RAM, up to 64GB of internal storage, and the defining feature of the Galaxy Note line, the S Pen stylus.

Add to these set of features for the Galaxy Note Tab two cameras (5 megapixel for the rear snapper and 2MP for the front unit) and the usual Wi-Fi and Bluetooth connectivity and of course Android 4.1 Jelly Bean.