After reporting a record first quarter performance, Samsung has now also taken the title of being the world’s biggest vendor of mobile phones, two research firms have confirmed.

This achievement marks the end of Nokia’s reign as the world’s biggest mobile phone vendor, a title it managed to hold on to for almost one and a half decades or 14 years to be exact.

The data comes from IHS iSuppli and Strategy Analytics.

According to iSuppli’s data, Samsung has shipped 92 million mobile phones for Q1 2012.

Even though this was a 13 percent decrease from the 106 million it shipped during the same quarter of last year, it still edged Nokia, which shipped 83 million smartphones in last quarter.

Nokia’s mobile phones sales figure for Q1 2012 is a 27 percent decline compared to its 116 million during the comparable quarter last year.

Meanwhile, Apple trails at number three with 35 million phones (all of them smartphones as Apple only sells iPhones) shipped within the first quarter.

LG comes in fourth with 14 million phones sold for the quarter, according to IHS iSuppli, a 23 percent decline from its performance in the first quarter of last year when it shipped 18 million mobile phones.

RIM rounds up the top 5 with 11 million, a 21 percent decrease from its showing of 14 million last year’s first quarter. 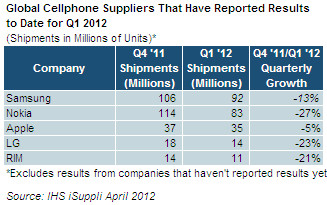 When it comes to smartphones, however, Apple is leading, according to iSuppli. It sold 35 million smartphones while Samsung is said by the research firm to have only notched a 32 million unit smartphone sales figure for the just-ended quarter. 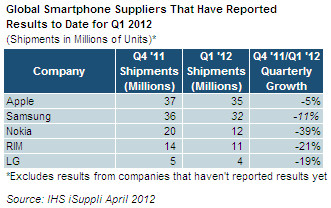 Apple is said to have sold 35.1 million iPhones, a big jump from 18.6 million units in the first quarter of 2011 getting the Cupertino, California-based giant a global market share of 9.5 percent. 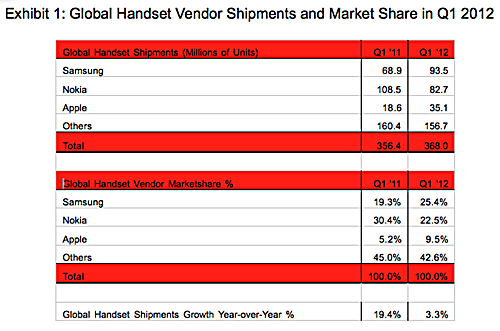 As for smartphones, Strategy Analytics begs to differ with IHS iSuppli: it indicates that Apple was beaten by Samsung in terms of sales.

According to Strategy Analytics, Samsung shipped 44.5 million smartphones for Q1 2012, a massive increase from 12.6 million units for Q1 2011.

It garnered Samsung a 30.6 percent market share in smartphone sales for the first quarter, the research firm said. 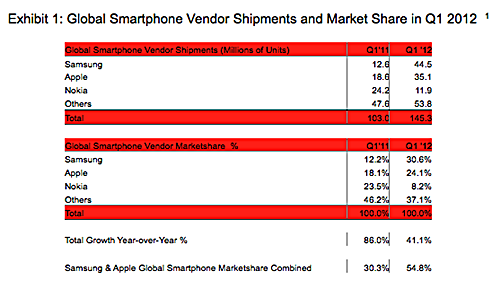 Samsung remains very optimistic about its performance for the coming quarters.