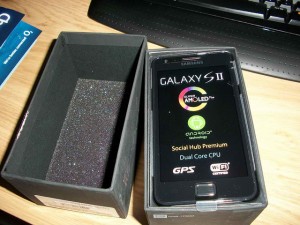 The Galaxy S II is Samsung's most purchased smartphone to date. (Image: Alan_D, via Flickr / CC)

The study found that Samsung now sits at the perch during a period when overall market conditions are in a decline. The full report is available at Gartner’s official website and costs $10,000.

According to the paper, Samsung currently dominates other smartphone makers that produce handsets running Google’s Android mobile operating system and has sufficient business to surpass Nokia’s sales. The company has a 40 percent share of the Android smartphone market, while other device makers of the platform only managed to grab less than ten percent share each.

“Global sales of mobile devices declined more than expected due to a slowdown in demand from the Asia/Pacific region,” said Anshul Gupta, principal research analyst at Gartner. “The first quarter, traditionally the strongest quarter for Asia – which is driven by Chinese New Year, saw a lack of new product launches from leading manufacturers, and users delayed upgrades in the hope of better smartphone deals arriving later in the year.”

The developing Asian market will slowly recover so local providers can expect greater revenues in the months to come, with Gartner forecasting growth for Chinese manufacturers Huawei, ZTE, Lenovo, and Yulong after the slump. In the Western hemisphere, Android and Windows Phone maturity, alongside the release of the highly anticipated Apple iPhone 5, will help boost sales during the second half of this year.

For now, Nokia will not be receiving any word of this report as good news, especially with the company riding the mobile industry on the top spot since 1998. Over the first quarter of 2012, Samsung sold 86.6 million phones – a 25.9 percent increase – and beat Apple, which only sold 38 million iPhones, to grab the lead spot of the smartphone shipments sector. Of the 419 million mobile phones sold during the period, 144.4 million were smartphones. Nokia only accounted for nine percent of the smartphone market, with Samsung and Apple combining for over 40 percent.

Gupta added, “Smartphone sales are becoming of paramount importance at a worldwide level. For example, smartphone volumes contributed to approximately 43.9 per cent of overall sales for Samsung as opposed to 16 per cent for Nokia.”