Qualcomm has revealed details about its next-generation processor, the Qualcomm S4, and it’s one impressive System on Chip (SoC). 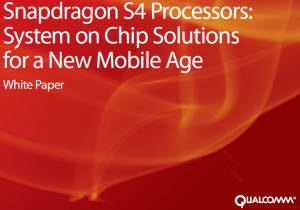 Through a recently-published white paper, Qualcomm reveals that the S4 SoC will be produced using a new 28nm process, cramming more into a smaller chip. The S4 will integrate the Krait CPU and Adreno 225 GPU.

In the white paper, the S4 is also revealed to have “the industry’s first fully integrated LTE world mode/multimode modem.”

It supports LTE, HSPA, GSM, CMDA, EV-DO and more meaning devices running on the S4 will be flexible to network providers worldwide.

The Krait CPU used in the S4 is touted to have 1.6 times the performance of the Qualcomm Scorpion CPU. Nonetheless, it is thrifty with less power consumption of up to 25 to 40 percent.

The new Adreno 225 GPU on the S4 is also touted to have 50 percent better performance in graphics over Adreno 220.