Pantech has unveiled its new Element tablet ahead of CES 2012 in what would be another addition to the AT&T lineup of 4G LTE devices.

According to BGR, the rugged slate is set to arrive on January 8, one day before the Consumer Electronics Show 2012 in Las Vegas officially starts, which is on the 9th.

The Pantech Element will come with a 1.5GHz dual-core processor, an 8-inch screen with Piezo Motor haptic feedback at an unknown display resolution, 16GB of internal storage and preinstalled Android 3.2 Honeycomb.

A 5MP rear-facing camera will help capture images and videos in full HD while the 2MP front-facing snapper has 720p video capture. 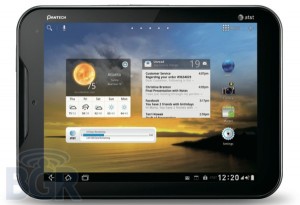 Albeit having an IP57 waterproof rating, the tablet still requires capped ports before taking a dive.

More information will be available for this tablet at the CES 2012 so expect updates to come like hot cakes, and not only for this device.