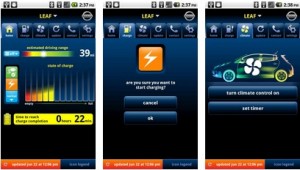 Previously, Apple iPhone owners exclusively had dedicated access to the Nissan LEAF on a mobile device; the only other method was to control the car remotely using Nissan’s website.

The new Nissan LEAF Android app has similar features to its iPhone version, but with tabs positioned on top, rather than the bottom.

Android creator Google has long been a strong advocate of plug-in cars, so adding the Nissan LEAF Android app to its marketplace seems fitting.

Users who both own a Nissan LEAF and an Android device may try using the free application here, or search for it on the Android Market.

However, only the U.S. version of the Nissan LEAF Android app is currently available, but the company intends to roll out the application to other countries as well.