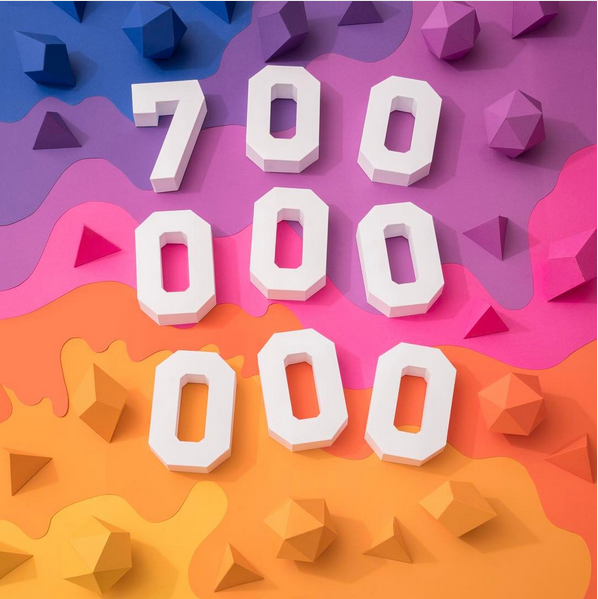 Thanks to Snapchat, Instagram now has additional 100 million users—bringing up the number to 700 million. That is impressive for a company that was once almost walking in the shadow of a rival app—Snapchat.

In the last nine months, the app has recorded more growth than ever owing to the fact that it copied a very popular feature owned by Snapchat—Stories. Not that the app wasn’t doing fine before August [when Instagram launched its own version of Stories], the truth is, its growth rate has been phenomenal since that time.

“We’re thrilled to announce that our community has grown to more than 700 million Instagrammers. And the last 100 million of you joined faster than ever.

“We’ve made it even easier for people across the globe to join the Instagram community, share their experiences and strengthen connections to their friends and passions. With new features like stories, live video and disappearing messages in Direct, people now have more ways than ever to express themselves and feel closer to what matters to them,” Instagram wrote in a blog post on Wednesday.

What this means is that 700 million people now use the platform every day, while about 400 million people check in daily. This could be the beginning of greater things to come, especially when you consider how other Facebook-owned companies are doing. WhatsApp and Messenger are the other two apps from the same company doing impressively and giving rivals run for their money.

So, what’s the secret behind Instagram’s steady and impressive growth? The answer is quite simple—Instagram did not only copy Stories; it reworked it and added some new innovations to the feature. By doing this, it proved that copying a feature isn’t enough, but reworking it and re-presenting it to the market is what matters the most.

When quizzed by TechCrunch on his company’s copying from Snapchat, Instagram’s CEO Kevin Systrom didn’t deny the fact that the new feature was taken out of the books of Snapchat. When asked to confirm if that was the case, he said: “They deserve all the credit”, insisting that “This isn’t about who invented something. This is about a format, and how you take it to a network and put your own spin on it,”

Just a couple of weeks ago, Instagram announced an important milestone; announcing that it now has 200 million daily active users on Stories. The success story of the feature can also be traced to the number of people who post update to their story or view their friends’ posts.

Shortly after launching its own version of Stories, Instagram began recommending accounts it feels you would love to follow; thereby taking a different route from what we have always known Snapchat’s version for.

The feature, strategically placed atop the Explore tab will start showing a handful of users a bar of Stories from accounts they could follow. Recommendations are tailored according to topics you care about and accounts you follow.