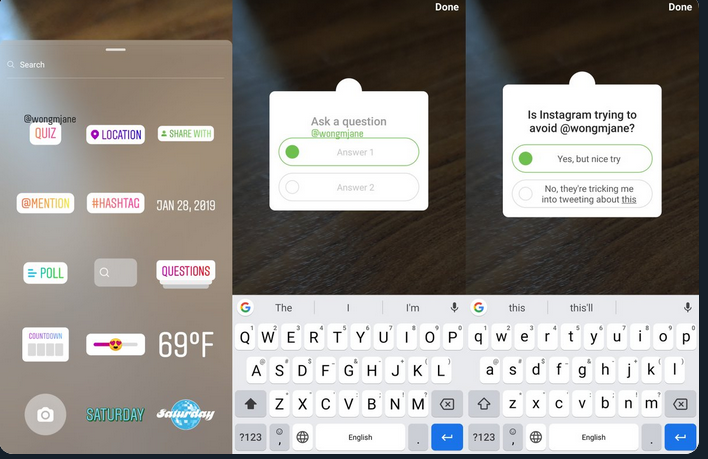 Instagram is no doubt in love with stickers—the last time out the ephemeral picture sharing app rolled out some question stickers. Before then, there were election stickers for the US Election Day; and now report suggests Instagram is working on “Quiz Stickers.”

According to reverse engineer and reliable Twitter user, Jane Manchun Wong, the Facebook-owned social media giant is already working on quiz stickers. Information about the upcoming stickers is pretty scanty at the moment, but we are pretty sure many celebrities will love to use them when eventually released.

Quiz stickers are also going to be very useful for companies and radio/TV presenters who like to engage their followers online.

Instagram’s love for stickers dates way back—and as a matter of fact, the company has made a success of the feature. Just like Snapchat, the company has been able to keep its users asking for more since it first launched its first set of stickers.

In 2016, the social media giant launched the smiley face stickers, which allows you to add context to your story with stickers regardless of where you are or what you are up to. Once you take a photo or video, new stickers button will appear next to the text and drawing tools. Tap the smiley face to find customizable stickers for weather, the current time, and your location. To add a location sticker to your photo or video, simply search for your location and choose from the list. People watching your story will be able to tap the sticker to learn more about the location. However, Instagram says your story won’t appear on the location page itself.

A couple of weeks ago, Instagram added some new features to its version of Stories—countdown sticker, and question stickers. The new stickers can be used in Live Videos and to share music recommendations. For the records, Instagram continues to add series of features to Stories as it seeks to reinvent a feature it copied from Snapchat.

The question sticker just like the yet-to-be released quiz stickers will be very helpful to users considering the fact that they now respond to questions with music. Users can now choose to respond with a message or share a song to their story. When a song is shared, it opens up the camera for the user to take a photo or video as the music plays in the background. Instagram has now added new camera effects that will respond to music being played.

To better organize Q&A interactions, the ephemeral photo-sharing app is also adding question stickers to Live Videos. Questions chosen by a user streaming will be shown on-screen so that everyone can see which one of them is being answered.

Also launched the same time as the question stickers were the countdown stickers, which are interactive stickers within stories that allows you to count down to an upcoming moment. Your friends will have the opportunity to tap the countdown to follow or share it to their own stories, and they will be notified when the countdown ends.