Google Sites have garnered the top spots to lead in comScore’s monthly analysis of the U.S. search marketplace for the month of March at 66.4 percent of search queries conducted.

The qSearch analysis of the U.S. explicit core search market in March released three days ago by the leading source of digital business analytics comScore, accounted Google Sites to be on the lead with 66.4 percent market share, followed by Microsoft Sites with 15.3 percent while Yahoo! Sites settled for 13.7 percent. Ask Network came out at 3.0 percent, succeeded by AOL, Inc. with 1.6 percent of explicit core searches.

Not much has changed when compared to the results for February 2012. Google Sites, Microsoft Sites and Ask Network maintained point percentages, while Yahoo! Sites decreased by 0.1 point and AOL, Inc. increased by 0.1 point, setting the ranking to be the same.

68.6 percent of searches held organic results from Google, 25.9 percent of which carried by Bing. 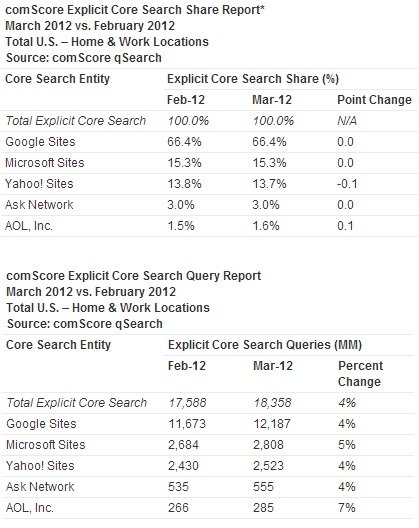