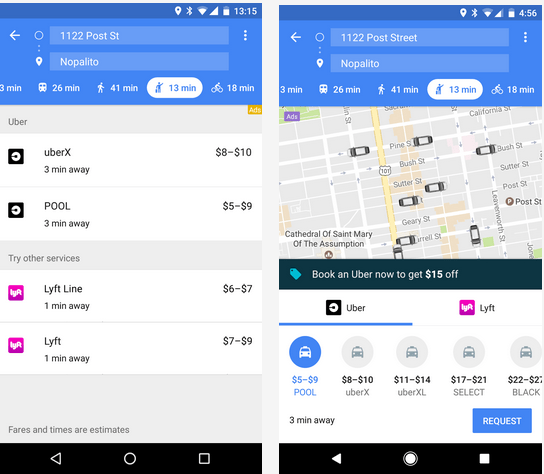 Google has removed the ability to hail an Uber ride within its Maps app. While you can still look up the route in Maps and “request the ride from the Uber app,” according to Google, you will not be able book a ride directly within the app.

It is not completely care why Google has taken such a decision at this time, but the decision to add that ability in January 2017 was greeted with mixed feelings. While the ability lasted, users could among several other things enter a location, identify route, and check Uber prices and finally request a ride without exiting the Maps app.

For now, there is no official confirmation of the removal by Google, but a statement on the Google Maps Help page per Android Police all but confirmed that the option will no longer be available: “you can no longer book Uber rides directly in Google Maps.”

While on a transit journey, Google Maps will appear in the app and on the lock screen of your Android device. You can tap a “start” button at the bottom of the screen with the details about your transit journey. This will enable you to get live updates as you ride in your local trains on buses.

Maps will alert you when you are getting close to your bus stop. Just the perfect feature for a traveler that knows little or nothing about his destination. A perfect tool for individuals who sometimes sleep off during a long journey.

That update was the first clear indication that Google wanted the app to become more interactive when being used. Though, an earlier update launched in March 2017, had shown that the company was clearly working towards integrating AI into the app.

Got something to add to the Google Maps story? You can share it with us by using the comment box below. You can also share your new experience with us per the inability to now book your Uber ride via the Google Maps app.