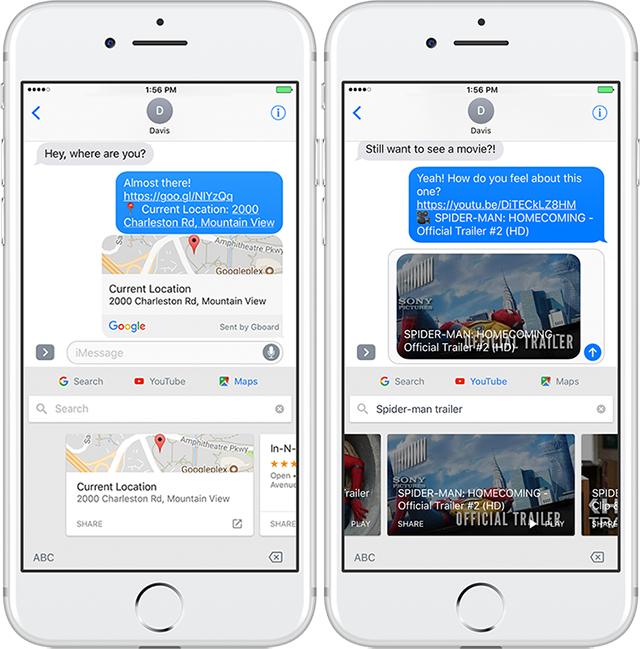 Google’s powerful keyboard app for smartphone, Gboard, has some new updates—you can now search for YouTube videos and Maps. Currently only available to iOS users, the new feature will let you share your current location and search for your favorite videos.

To use the newly added Map feature on Gboard, simply tap the “G” button at the top-left corner of the app’s interface, followed by the Maps to share your current location with your friends and loved ones. You can also search for a location to share using the new feature; simply follow the same procedure as sharing your current location.

To search for a YouTube video on the Gboard app, simply tap on the “G” button, followed by YouTube to search for any video of your choice. You can share searched videos with your friends without leaving the Gboard app on your iOS smartphone.

There is also a new Ink feature that lets you draw and share your creations right from your keyboard. You can do this by tapping on the emoji button and then the pen icon on the app.

The iOS version of Gboard was launched by Google in 2016, and has attracted loads of interest from users. The iOS version was released along with a few features that you can’t find on your standard iPhone keyboard. With the app, you can search straight from within the app just by using the standard Google search.

You can also swipe between letters to type, thereby, speeding up word processing. To type, you can slide from key to key.

A few weeks back, Google made the app more appealing to users by adding a new feature to improve and make conversation faster. The feature suggests phrases, instead of just words when using the smart keyboard app.

That’s not all that was added by Google during the last update, the app now lets you draw an emoji on the screen to add to your conversation. The new feature that lets you draw emoji on your screen will be most interesting to a lot of enthusiasts who love using the Gboard in place of the default keypad. By taping on the emoji handwriting button to draw an emoji right on your screen, Google will automatically recognize the drawing and provide results that match the emoji in your drawing.

The Gboard now features an emoji search box where you can tap on the emoji handwriting icon to draw directly on the screen. It’s still an ongoing experiment, but one that’s worth it because it will further endear the app to the heart of millions of users.

Gboard now features phrase suggestions to predict what you plan to text next. “For example, try typing “looking forward” and Gboard suggests “to seeing” or “to it” as you type.” The new test feature is currently only available in English, but Google has promised to add support for more languages soon.

All new updates are available on iTunes!