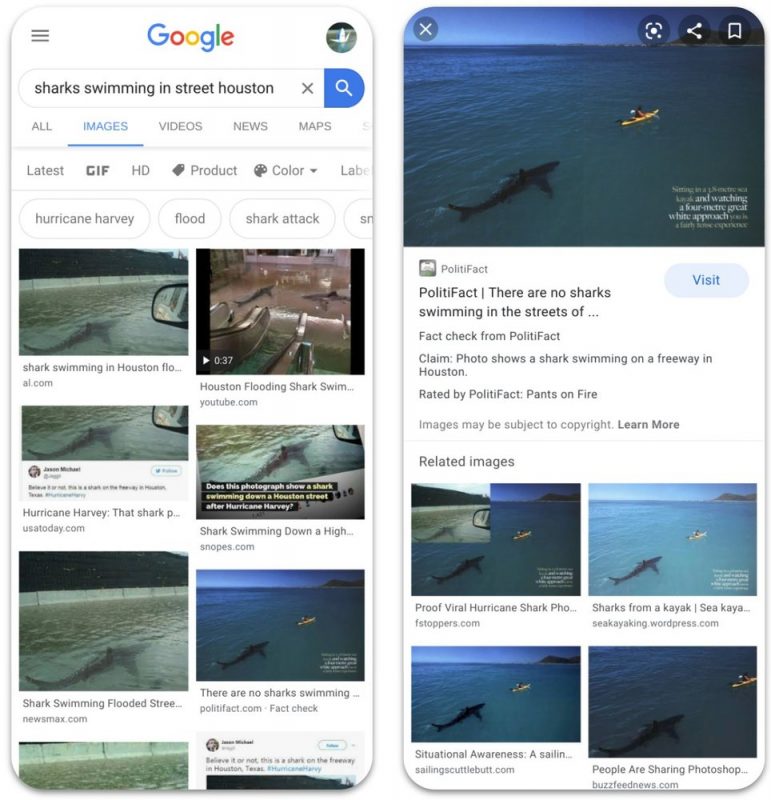 Google is bringing fact check info to Google Images. This is not a bad idea considering how increasingly popular and vastly improved visual media has become these days. With the power of technology, people are now able to tamper with original images to send the wrong signal/message to their audience.

In a blog post on Monday, Google highlighted the fact that questions now surround the “origin, authenticity or context of an image.” Just the other day, Twitter and Facebook both removed a tweeted video and a post posted by President Trump—labeling it “manipulated media.”

“We are surfacing fact check information in Google Images globally to help people navigate these issues and make more informed judgments about what they see on the web. This builds on the fact check features in Search and News, which people come across billions of times per year.”

Going forward, when you search Google Images, you may see a “Fact Check” label appear beneath image results. Tapping on one of the results of your search to view the image in a larger format, you will see a summary of the fact check that appear on the underlying web page. Google said labels may appear “both for fact check articles about specific images and for fact check articles that include an image in the story.”

Google is collaborating with independent sources to bring fact check labels to Google Image search on the web. Sources, according to the search engine giant, will rely on ClaimReview, which is an open method being used by publishers to indicate fact check content to search engines. The search engine giant expects the process to be smooth considering the fact that similar method is being deployed in both Search and Google News—so, discovering content will not be difficult.

Publishers have, however, been rest-assured that the label will in no way affect ranking in terms of results. According to Google, the systems have been designed in such a way that it surfaces only the most relevant, reliable information available such as from sources that provide fact checks.

The fact check feature has already rolled out, and is widely available from today to all users. As we approach the US election, a feature like this could become very useful as politicians try to outdo one another; using every available technology to make and remake media to suit their needs.

Last week, Twitter labeled one of President Trump’s video tweet as “manipulated media.” The microblogging platform and Trump have been on each other’s throat for a while; and the latest, which took place on Thursday is set to prolong the battle even further.