The Google Assistant on Pixel 2 and 2 XL is now even more equipped than ever with the extra ability to troubleshoot on your phone. The update was first spotted by a reader on Android Police. The reader was able to find out about the new addition after asking the powerful Assistant why his phone wasn’t charging fully. 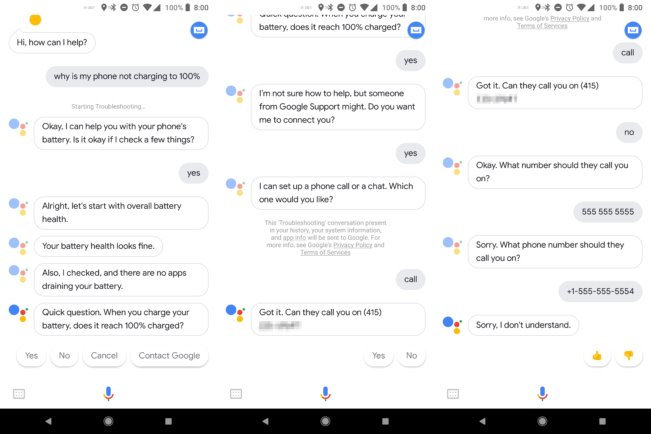 Google is sure proving to everyone that the list of what its Assistant can’t do is exhausted—at least not anytime soon. This is one addition that could prove very useful for a lot of us.

The conversation Artem had with the Assistant was quite revealing too—it also showed that besides being able to run a health check on your battery, Google Assistant can also run diagnostic checks on camera and Bluetooth connectivity. If you live outside the US and still can’t get the Assistant to do some or any of these things on your phone, then it might probably be exclusive to users in the US. I haven’t tried it yet as I don’t have a Pixel phone, but Scott Scrivens of the Android Police who lives in the US also can’t use on his Pixel 2 XL in the UK.

This might just be a small test limited to a small set of users probably living in the US. However, an official statement to that effect would have helped a great deal—at least it would have given us a better understanding of what Google is up to.

Also, nothing suggests that the test is limited to the Pixel phone alone, but the next couple of days or maybe weeks would bring us up to date with what Google is really up to. In the meantime, you can drop us a line or two in the comment box below if you have also been able to get the Google Assistant to troubleshoot on your phone.

Finally, an update has been added to the Google Pixel Phone Help pages. The update, according to Android Police, is for battery and Bluetooth, which now references the Assistant as an additional troubleshooting option. The reference on the Phone Help page is the closest we have to an official confirmation of the new addition.

Google launched its Pixel phones in 2016, and soon followed it up when it launched Pixel 2 and Pixel 2 XL phones last October. In terms of specifications, the Pixel 2 comes with a 5-inch AMOLED screen with a FHD resolution. While the XL, the larger version of the Pixel 2, is built with a 6-inch QHD+ pOLED display.