Home » Apps Which Pay You [Infographic]

Apps Which Pay You [Infographic]

In the normal world, one would expect that either apps for smartphones or tablets are free or can be purchased for a fee.

However, this infographic we have here today which was made by Topapps.net lists 15 apps that give their users money.

The first app on the list is Surveys On The Go. What is it? It’s an app that pays users for participating surveys. It pays anywhere from $0.25 to $5 cash for user opinions with the average survey priced at $1. According to the infographic, the surveys come from Fortune 500 companies, major political campaigns and companies wanting to get opinion on trials. [ For iOS || For Android ]

The next app is Gigwalk. “Gigwalk,” the infographic notes, “connects users with businesses looking to get local contract work done.” These contract work include taking photos of store displays, testing other applications, delivery services, mystery shopping and more. Payout ranges from $6 to $220, Topapps says. Nonetheless, only residents of the United States and some parts of Canada can get Gigs. [ For iOS || For Android ]

The third app is Ibotta. This app lets its users buy regular products and brands to earn money. “Ibotta pays real cash for buying one’s favorite products at over 40 stores like Target, Walmart, Kroger, Safeway, Whole Foods and more,” the infographic notes. How much money can be made from Ibotta? According to this, there’s a $10 payout just for trying the app. Within the first two weeks of usage, redeem any five offers to get another $10. [ For iOS || For Android ]

The fourth app is Shopkick. As the name suggests, this app has something to do with shopping. However, one does not necessarily have to buy something to earn on Shopkick though that is an option. Tasks include checking out stores and items on stores.  However, the infographic notes that “it might take you a while to earn perks like that $10 gift card.” [ For iOS || For Android ]

The fifth app on this 15-member list is CheckPoints. With this app, one does not need to get to checkpoints to earn, what they can do with it is to watch videos and scan barcodes to earn points. These points can then be converted to Amazon.com and Walmart gift cards, American Airlines miles, gadgets, and even donations to charities. [ For iOS || For Android ] 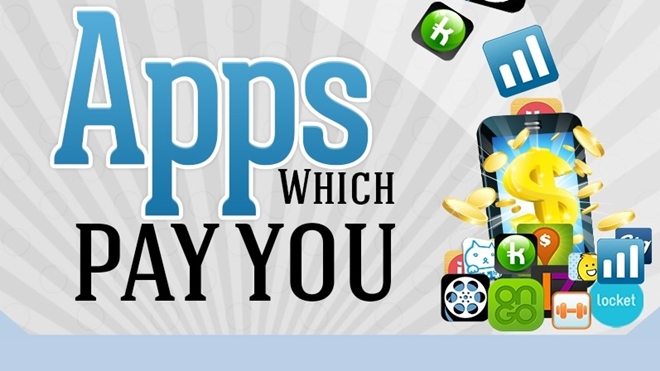 The sixth app is App Trailers. Users of App Trailers view high quality trailers for apps to earn cash that can be redeemed through PayPal or Amazon. [ For iOS || For Android ]

The seventh app on the list is Iconzoomer. With Iconzoomer, people can earn 25 Euro cents via PayPal for each photo they take and upload of market products. Opinions on these products are also required. [ For iOS || For Android ]

The eight app on the list is GymPact. This app really caught our eye here at Social Barrel because it promises to pay people anywhere from $0.50 to $0.75 every time they go to work out at the gym. There’s  also a penalty for not going to work out so essentially, and as Topapps.net also noted, the app pays you to get fit. [ For iOS || For Android ]

The ninth app in our list is ESPN Streak for the Cash. As the name suggests, this app is made by ESPN. Users of the app predict the result for each game with the goal of getting as many consecutive right guesses every month. Big bucks is at stake with this ESPN app as the monthly cash prize is $50,000. [ For iOS || For Android ]

The tenth app on the list is Phewtick which people can use to record meetings with friends to earn points. The app generates QR codes that friends can scan to record meetings. Points can be cashed out via PayPal. [ For iOS || For Android ]

The eleventh app is NPolls which is similar to Surveys On The Go. Every survey about topics like politics, sports, social trends, lifestyle, brands and more earn $0.20. Money accumulated by users from answering these polls can be redeemed via PayPal. [ For iOS || For Android ]

In the twelfth spot is Mobile Rewards which gives its users credit by watching videos and completing offers. As with a host of other apps on this infographic, credit gathered can be transferred via PayPal. [ For iOS || For Android ]

The thirteenth app on the list is Field Agent. The infographic says, “You can browse for jobs in map view or see a list of available jobs near you. Accept a job (like a survey or a price-check on a product) and complete it within the 2-hour time frame, submit your work for verification of accuracy and approval and get paid securely via PayPal.” Each job pays anywhere from $3 to $12 each. [ For iOS ]

Second to the last app listed here is Locket which offers an interesting way for users to make money. One does not have to do anything on their phone for this one but just let the app take a space on the lock screen which is used to display ads. “With one swipe, you can either open the add or unlock your phone the way you always do. No matter what, you get paid,” the infographic notes. Pay can reach a maximum of $260 every month if you unlock 3 times per hour, every 24 hours, every day. [ For Android ]

The last but app on the list is EasyShift. The app gives users shifts which are tasks that include taking photos, giving an opinion or recording the price of a product. Payments are made via the ubiquitous PayPal within two days. [ For iOS ]

Learn more including the ratings of these apps on the Apple App Store or on Google Play Store in the infographic from Topapps.net below.

Apps That Pay You