Even though they may have just launched their first smartphone, Amazon Fire, the retailer doesn’t take a break. According to some last hour rumors, a revamped version of one of their tablets is on its way! And it’s pretty powerful…

It’s been a while since Amazon’s latest tablet hit the market, so we’re not that surprise after hearing this. But enough with the details, let’s see what these guys are up to!

A gaming website spotted a benchmark for a Kindle tablet in the AnTuTu database, but something was different. This one was way more powerful than the previous model. See for yourselves: 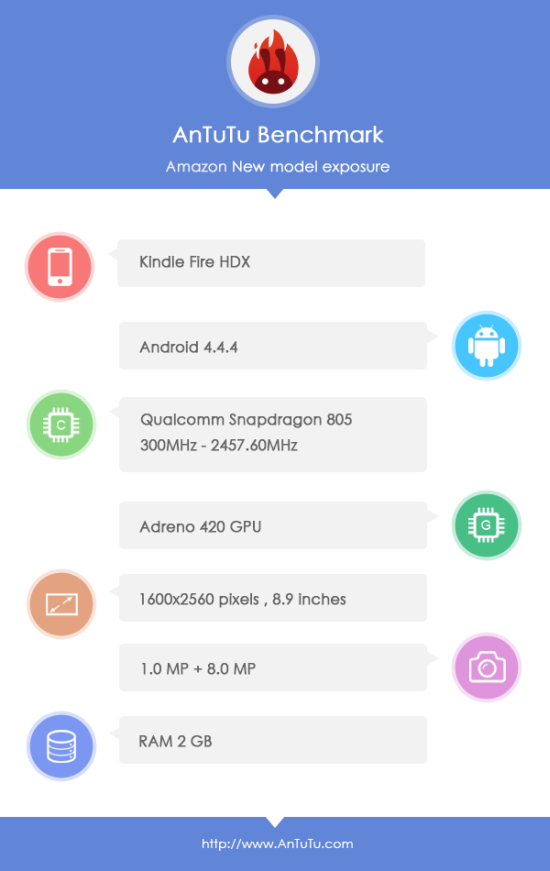 Indeed, some specs were improved while others stayed the same. The most notable  changes are when it comes to the processing power. The upcoming Kindle Fire HDX is going to be powered by an amazing Snapdragon 805 CPU, with four cores, clocked at 2.5 GHz, alongside an Adreno 420 GPU. The previous one used the Snapdragon 800 and an Adreno 330, so this is definitely an important update.

Let’s not forget that Amazon is very interested in offering a quality multimedia experience, so this could be the perfect chance for the 805 to show its true powers! After all, this baby can handle stuff like 4K resolutions…

As for the rest of the specs, it’s going to have 2 GB of RAM and a 8 MP camera on the back, while on the front we will find a 1 MP snapper, good enough for some decent video calls.

The 8.9″ display will have a resolution of 2560 x 1600, which is also pretty high, but considering the above mentioned internals, expect some eye-catching graphics from the Kindle HDX.

Last but not least, Amazon will use Android 4.4.4 for their new tablet, which is also a slight boost, but let’s not forget about which device we’re talking here, so don’t expect to see something close to stock Android, as this operating system is going to be highly customized with Amazon stuff, making it hardly recognizable. But somehow, we actually don’t mind.

Nothing about an eventual release date for the moment, but let’s take a look in the past. The last one was launched in November, while the Kindle Fire HD was introduced in September, so expect the new HDX 8.9 to make a first appearance somewhere in the last quarter of 2014, alongside the 7 inch version. Yeah, I might have an idea about what Santa is bringing me this year…

So there you have them, all the details about the updated version of one of the best tablets we got our hands on in 2014. As probably can tell, we’re eagerly waiting for any detail about it, but what about you guys? Looking forward to getting the new Amazon Kindle Fire HDX 8.9?