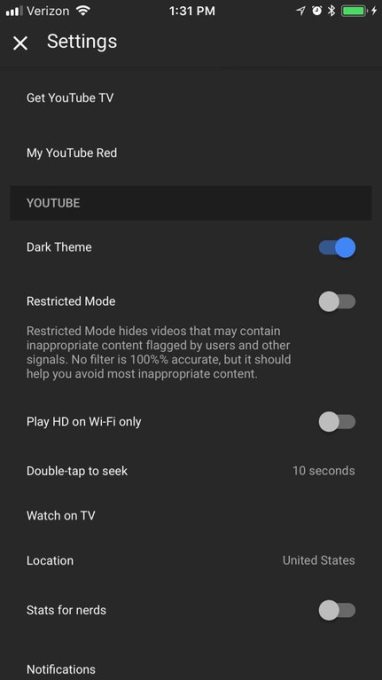 YouTube is reportedly testing a new dark theme for its iOS app, Mac Rumors reports. The new dark theme was spotted by a Reddit user who made the info available to the tech blog.

Not many people have seen the feature as at this Tuesday morning, which pretty much confirms the fact that it is still being tested and only available to a handful of users. The release note for version 13.0.1 made available by YouTube did not include any info about the dark theme feature.

While this is a relatively small addition to the official YouTube app for iOS, it is one that places the video streaming site at per with other apps like Twitter in terms of dark theme or nigh mode.

YouTube formally announced Dark Theme in the middle of last year after it quietly added it to its service without raising anyone’s eyebrow. Dark Theme, according to the company, is designed to “cut down” on glare and let you take in the true colors of the videos you watch. It [Dark Theme] turns your background dark, and enriches your YouTube experience.

Last December YouTube became the latest to signify its interest in adding Stories to its platform when it began testing a feature called “Reels.” Reels is not an exact version of Snapchat’s Stories because YouTube wants to add some changes to it. It will appear in a brand-new tab on a creator’s channel—something that makes it different from Instagram’s and Snapchat’s versions.

YouTube’s senior product manager Roy Livne in an announcement said Reels are “YouTube’s spin on the popular “stories” format.” He explained further on why the Google subsidiary is joining the long list of social networking companies that have launched their own versions of Stories:

“We learned that you want the flexibility to create multiple Reels and have them not expire, so we’ll give you those options. We’re also bringing creator-focused features like linking to YouTube videos and YouTube-y stickers. Just like we did with Community, we’ll be experimenting with a beta version of Reels to learn and improve the product before expanding to more creators.”

With Reels, creators on YouTube can express themselves and engage fans without having to post a full video. Reel’s unique selling point, unlike the original Stories, is one that gives creators to make multiple videos that won’t get expired. Creators can make a couple of mobile videos of up to 30 seconds each, add filters, text, music and many more.

The video-streaming website recently pulled the plug on paid content, and instead opened the door to gaming creators to make money on their channels. Users were from last September blocked from creating new paid content on the site—indicating that an end had finally come to paid content.

Paid content was launched in 2013, but failed to achieve desired results—and unsurprisingly had to be discontinued to pave way for something different. Barbara Macdonald, Product Manager at YouTube said less than 1 percent of creators used paid content before this latest decision to pull the plug.