Music creates a mood. And if you study while listening to music, you can relax and allow you to defeat your anxiety and stress while learning. Background music can help in improving your focus. This is probably one of the reasons many students are watching or listening to LoFi hip-hop channel on YouTube. 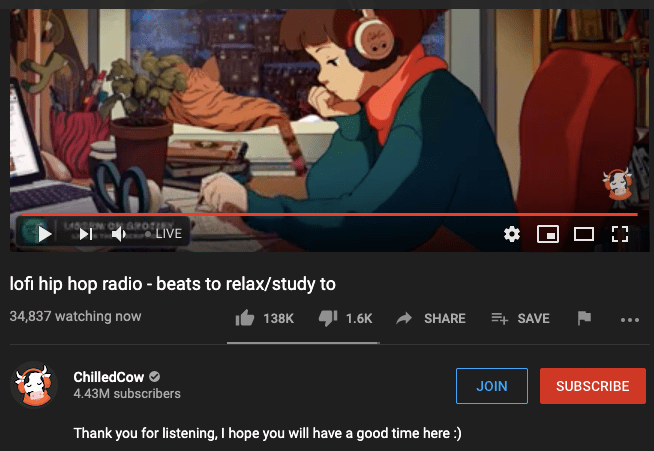 Over the weekend, YouTube mistakenly suspended LoFi hip-hop channel. It is one of the most popular live streaming channels with over 218 million views. The owner, ChilledCow, produced over 13,000 hours of videos.

The live video provides a long playlist of songs that can help you relax. The music is designed for individuals who wish to listen to some relaxing music while working or studying. The video is a looping image of a woman who is working.

Millions of people have watched the video, making it one of the most popular channels under this genre.

It resulted in a flurry of tweets. Fans were upset that the video has been shut down but they are hoping that it would back up again.

Other fans just shrugged it off and stated that perhaps the Study Girl has finally completed her homework.

But the creator appealed to YouTube. Soon after, the ban was lifted and the live feed was back online. The creator did not change the name.

After the live feed was back online, YouTube published a statement and said that the termination was a “mistake on our side.” Furthermore, the company shared feedback with its review team to ensure that nothing like this would happen again in the future.

However, this is not the first time that the channel’s live streams have gone down. The channel went down a few months after the live streaming started. The reason for the temporary cancelation was copyright.

The creator utilized a GIF from Studio Ghibli. It showed a young woman studying or doing her homework. But it received a copyright shut-down request.

When the channel was up again, the character was replaced with a photo of a young woman. But this time, the creator utilized a copyright-free version.

ChilledCow is not alone in this issue, though. Several YouTubers are using other artists’ songs on the live stream.

YouTube is strict about its ContentID program. This program lets studios and record labels in cracking down channels that are using their songs without their permission.

Even though the creators of those channels got permission from those artists to use their songs, it is still likely that someone would request a takedown.

One of the best things about ChilledCow’s channel and other similar channels is the community that they built.

When you visit the channel, you will find some messages from other people who are also listening to the live stream.

With the community size, the account suspension was noticeable.