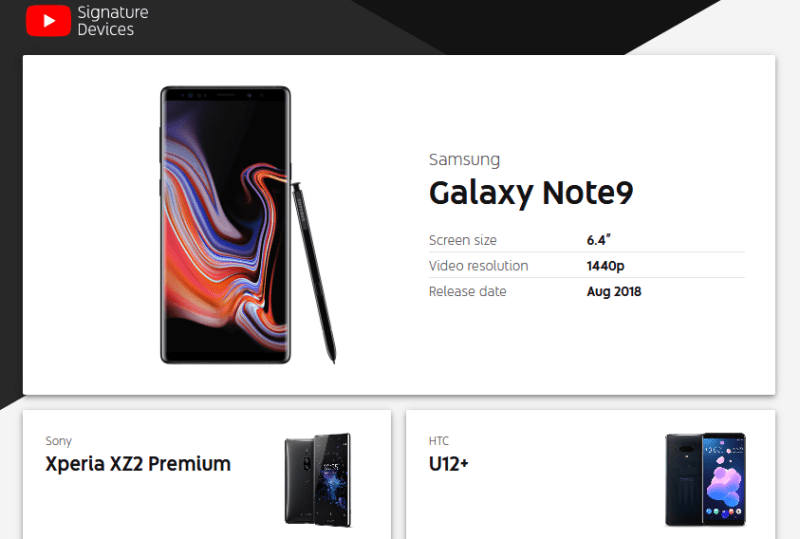 In a bid to improve your viewing experience when watching videos on YouTube, Google has started recommending phones. Recommendation, however, will only be made when using an inferior phone. With a new Signature Devices program, the video-streaming website plan to encourage everyone to use devices that boast of the latest video technologies.

In the last couple of years, YouTube has been upgrading its equipment and features to accommodate the latest and most advanced technology to enhance video viewing on its platform. To provide the best for its users, the onus does not only rest on the Google owned company, but users equally have a role to play in terms of the quality of devices they use.

Google, however, did not specify what kind of features it looks for when recommending another device, however, it is clear that not all phones have the capacity to deliver top level quality pictures. On the list of phones supported by YouTube’s Signature Devices are high frame rates, hardware VP9 profile 2 decoding, 360-degree video, HDR video, 4K decoding, and reliable DRM.

An ’A’ list of supported phones were also listed by YouTube, and they include: the newly launched Galaxy Note 9, Sony xperia XZ2 Premium, OnePlus 6, LG G7 ThinQ, HTC U12+, second-gen Pixel phones, Nokia 8 Sirocco, and a couple of others. On the whole, a total of 19 phones were added, and the list is expected to increase in the coming months as more devices are launched by various phone manufacturers.

According to Google, “these smartphones can deliver the best-in-class YouTube experience by combining next generation technologies, video performance, and reliability. With a Signature Device, you can enjoy vivid HDR videos, immersive 360° video, and fast video load times – all while using less bandwidth.”

In November 2016, YouTube announced the addition of High Dynamic Range [HDR] video support. That update was all about colors; and for those not familiar with what HDR is, it is similar to HDR photography.

With HDR, users are able to see more vibrant colors as well as make of the image in darker, shadowy scenes. This is made possible by the fact that it offers improved picture quality with higher contrast. The technology is pretty new, and is not available to a wider audience. As a matter of fact, only a handful of users with supported devices will be able to use it.

In 2015, YouTube began rolling out new features and updates that gradually phased out some unsupported devices as well as older Apple TV. The company notes that some devices made on or before 2012 will find out some app specially made by YouTube would no longer be compatible with their devices. This is based on a change in YouTube’s Data API, which it says opens it up to features like comments, flagging videos, captions, and RSS push notifications.