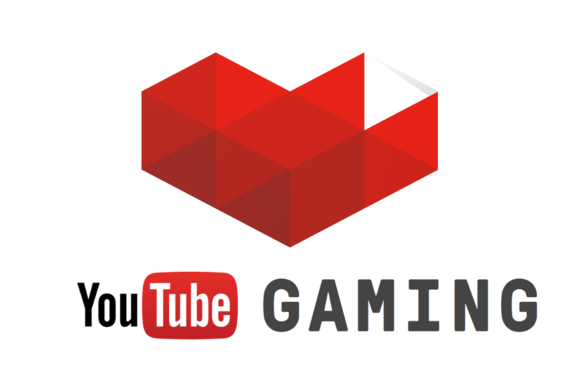 Some games are so popular regardless of regions—and no matter the language or color, they rank highly among people. Minecraft and Grand Theft Auto for instance are two uniquely popular games that transcend boundaries. Researchers at YouTube on Monday gave us a peep into how uniquely popular some of these games are, especially by regions.

I am pretty sure having a name like Pokémon GO on that unique list won’t come as a big surprise. Also, it won’t come as a surprise [for those that have been observing video game trends by countries or regions] to many that Pokémon GO didn’t rank among the hit games in Russia. YouTube researchers found out that while some games are universally popular, others are only popular in some regions, with some not at all in others. A case to consider is Madden NFL ’16, which is uniquely popular in the U.S—and of course, this won’t come as a shocker when you consider that the NFL is a household name in the region.

In Germany, YouTube viewers can’t seem to get enough of Deponia, an adventure game set in a junk world, according Engadget. While in South America, Lego Marvel’s Avengers is a huge fans’ favorite of Brazilians, but not as popular in other regions. Despite not rating Pokémon GO, Russians do not hide their love for S.T.AL.K.E.R.: Shadow of Chernobyl, ‘a ten-year-old mutant horror game about an incident from the Soviet days.’ Dofus is the favorite game of fans in France, while Puzzle & Dragons and Tower of Savior remain uniquely popular among people in Japan and Taiwan respectively.

The image below paints a clearer picture of how popular some of these games are according to regions. From the image, games like Farming Simulator in Poland, Tanki Online in Ukraine, and Heroes of Newerth in Thailand also made it to the list. 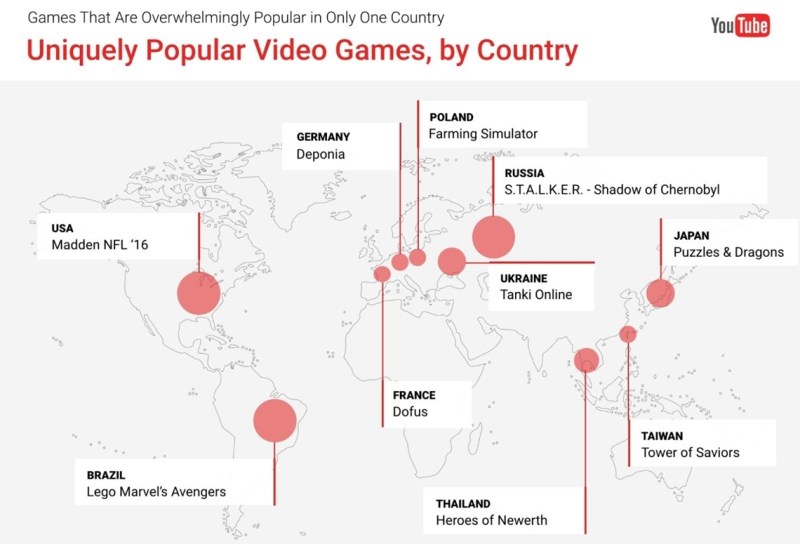 Games are not only ranked according to how popular they are in the 25 countries or regions on the list, the research result also shows that Minecraft ranks top in virtually every country, except Vietnam and Thailand.

The year 2016 will best be remembered as one in which a game like Pokémon GO against all odds won many hearts. It even became more popular at some point than some social network sites and apps, with players spending more time playing it. So, seeing it as one of those games that made it to that list, and popular in several regions [excluding Russia where it has been banned] is not a huge surprise. 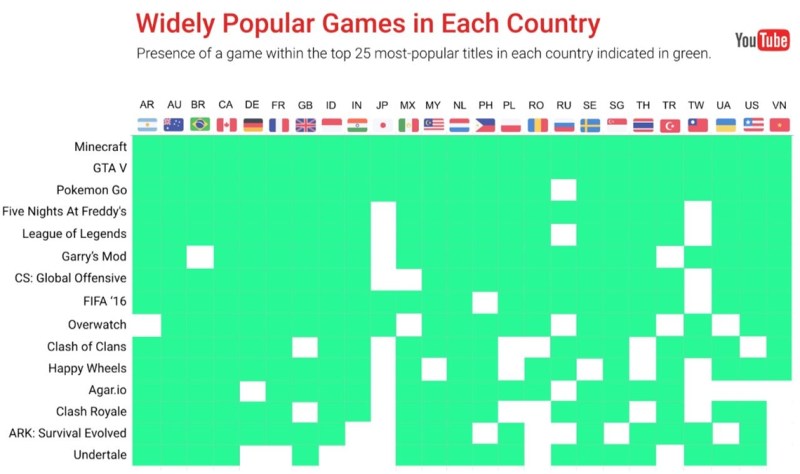 Never mind if your favorite game didn’t manage to find its way to the list; perhaps, you could get lucky when next YouTube decides to come up with a list like this one. Maybe then you can track your favorite game and know how popular it is in other countries.