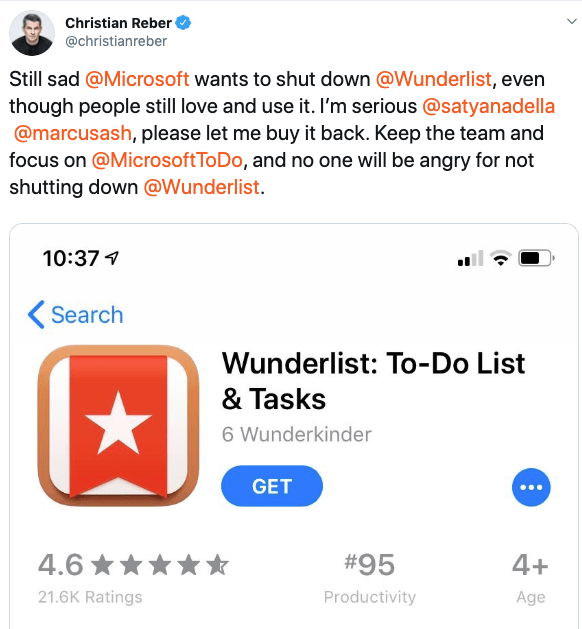 In 2015, Microsoft bought Wunderlist, a popular task management app. But two years after, Microsoft released a preview of its To-Do app.

This week, Wunderlist creator and founder, Christian Reber, tweeted its plea to Microsoft. He wanted to buy Wunderlist back from MS but allow the team to continue working on the To-Do app.

“Still sad @Microsoft wants to shut down @Wunderlist, even though people still love and use it. I’m serious @satyanadella @marcusash, please let me buy it back. Keep the team and focus on @MicrosoftToDo, and no one will be angry for not shutting down @Wunderlist.”

Reber made a serious offer to the company. However, Microsoft has not responded yet to his plea.

When Microsoft acquired Wunderlist in 2015, it valued between $100 million and $200 million. Microsoft has not issued a statement yet as to when it would shutter the said app.

The cloud features of Wunderlist are still running on Amazon Web Services, rather than Azure. Microsoft cannot pull the plug easily. It would only shut it down when the To-Do app has feature similarity.

If Microsoft would sell it to Reber, it would create complications as Wunderlist is a direct competitor of To-Do. Reber also tweeted that he would improve the app when he could re-acquire it. He promised to improve its performance, add new features and provide open-source code.

Microsoft has no indications of accepting Reber’s plea. But this is the result of the company’s app acquisitions.

When it bought Accompli, it managed to boost Outlook on mobile. However, when it bought Sunrise, people did not receive it well.

The acquisition of Wunderlist was mixed. Some were happy while others lamented on it. Microsoft is doing its best to keep Wunderlist alive. However, the threat of shutting it down made people sorrowful.

What Alternatives to Wunderlist Can You Use

It is a flexible free project management tool that has a layout similar to a pinboard. With that layout, it is easier to create personalized boards and unlimited lists. To stay on track, you can receive email notifications.

You can create, prioritize and organize tasks, as well as subtasks, projects, and subprojects. To help you monitor deadlines, you can add labels or customize your tasks through color codes. It also features project progress tracking using streaks and Karma points.

It has a series of project management tools. The app aims to create a Wunderlist type of app but with a better list of features. Because it is available across PC, Android and iOS, as well as macOS, Basecamp’s users are widespread.

It offers seamless integration with your mobile device. Evernote offers a multitude of features that can help you plan, execute and deploy your lists on time.

It is free to use and it comes with easy to use to-do list manager. nTask offers task management solutions that allow you to handle your to-dos smartly. It generates weekly timesheets automatically.