The social media analyst is famous for his biannual World Map of Social Networks, and the diagrammatic representation of the earth’s surface in December 2012 shows an intercontinental blue color for Facebook.

Faceook, CEO and co-founder Mark Zuckerberg’s brainchild, is now the number one social network in 127 of the 137 countries Cosenza examines.

Unyielding of its global supremacy against rivals, Facebook continued to pile up more countries, including Armenia, Kyrgyzstan, Latvia and Vietnam, where it perched atop their social network charts since June of last year.

According to Cosenza, Russia, the former Soviet Union, China and Iran – all with their own social networks – withstood the blue tidal wave that swept other countries worldwide.

For their respective local social networks, Russia has V Kontakte and Odnoklassniki, China has QZone, and Iran has Cloob. Notably, Cosenza’s World Map of Social Networks shows that the only major countries without Facebook sitting as top social network have these four social networking competitors. 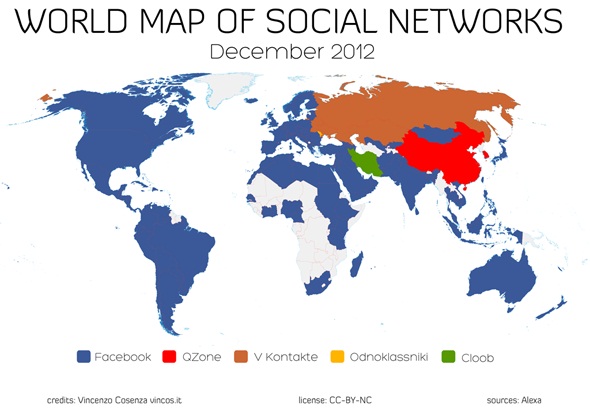