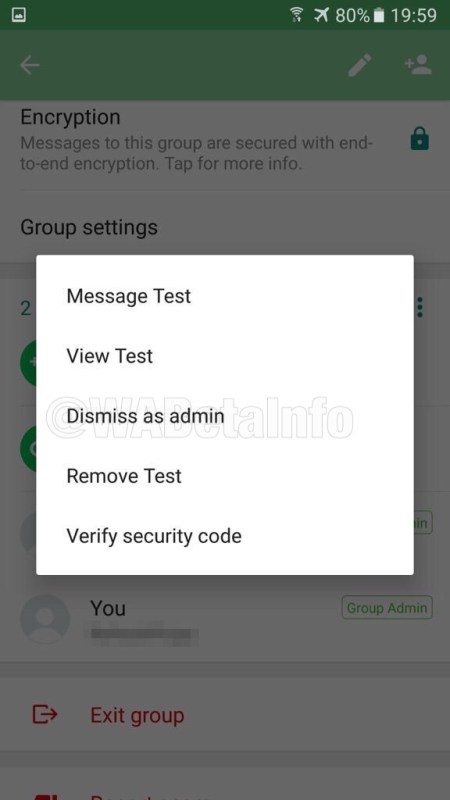 What is WhatsApp up to with its new Dismiss feature? Could it possibly be that the messaging app is demoting or relegating group admins? According to various sources, one of which is the Daily Mail, the Facebook subsidiary is testing a Dismiss feature that lets you demote annoying group chat admins.

The new feature [still being tested and only available to a few set of users], could allow you overrule some overzealous group admins who sometimes take drastic actions—sometimes removing a particular user from a group.

The feature was spotted by the usually reliable WABetaInfo, a specialist blog when it comes to WhatsApp-related news and info. According to WABetaInfo, the Dismiss feature has already been enabled by default in the latest version of WhatsApp 2.18.12 beta on the Google Play Store. You can access the feature if you have already signed up as a beta tester.

Here’s how it works, per WABetaInfo—the new feature will give the group admin the power to dismiss another group admin without necessarily removing him from the group. This is unlike what we had until now where an administrator in a particular group would have to remove another admin from a group, then add him again so as to demote him.

WhatsApp will soon roll out a new feature that will let you chat privately or one-on-one with any member of the same group. According to reliable tech blogger WABetainfo, the Facebook-owned messaging app will give you the opportunity to chat with someone in the group one-on-one.

Called “Reply Privately,” the new option will automatically open the chat with the contact to send a message, while the sent message will quote the group message.

If this option is about stopping spam messages within a group, then kudos to WhatsApp. The reason most people dread being added to any group is because of the alarming number of spam messages they receive. It’s so annoying that some users leave or mute group message or completely exit a group if they can’t handle it anymore.

WhatsApp is constantly testing new features, and the ‘Reply Privately’ feature is one that will encourage people who have some personal or private matters to discuss to do so without necessarily leaving the group.