Home » WhatsApp payment could soon be available in Brazil, Mexico and the UK

WhatsApp payment could soon be available in Brazil, Mexico and the UK

Home » Apps & Software » WhatsApp payment could soon be available in Brazil, Mexico and the UK 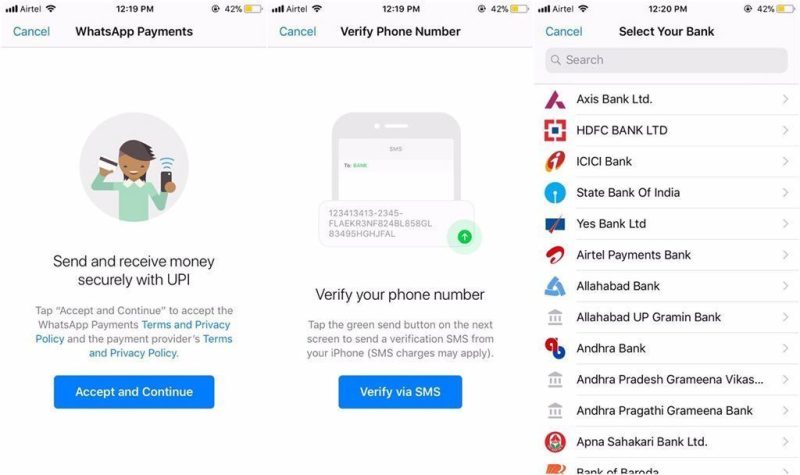 Earlier in the year, Facebook founder Mark Zuckerberg had hinted that WhatsApp payment would hit more countries before the end of 2019. In a statement on his Facebook page at the time, Zuckerberg said: We’ll roll out payments on WhatsApp in some more countries.” The latest we have on that is a Twitter post from reliable tech blogger WABetaInfo. In his tweet, he said WhatsApp payment is set to go live in Brazil, Mexico and the UK.

To configure the p2p functionality, you need to first verify your phone number via SMS and choose a bank from the list. Once this is done, the option to send payment is soon added and becomes available from the WhatsApp’s main interface. The functionality becomes available in the same area where you can also share file, video, contact and photo.

The feature is built on India’s Unified Payments Interface [UPI], which allows for instant money transfer between various bank accounts in India; one of the largest tech markets in the world. The UPI is a platform that enables exchange or transfer of funds between customers at no charges; and is the same as what other early entrants into the market are using.

WhatsApp soon added QR code support for payments about one month after launching the service in India. The QR code support allows WhatsApp users to carry out monetary transactions within the app. Apparently, that was the missing puzzle in the jigsaw needed to establish the platform as a force to be reckoned with in the Indian market.

To set up the QR code feature, simply go to the app Settings > Payments > New Payment and select QR code. This process will open a scanner that will search for a compatible QR code. As soon as the QR code is recognized, you can enter the amount you want to send to initiate the payment and authenticate it by using your UPI PIN.

In related news, Facebook is reportedly working on a new payment button that will enable users to send what is termed “Facebook coin” to other users. According to the report, users on WhatsApp will be able to send Facebook coin to their friends/contacts. This will mark the social media giant’s biggest move into cryptocurrency.

The new payment option, according to an Italian tech site Mobile World, per Android Police, appeared on both the iOS and the Android apps of Facebook in Italy. This appears to be an “Italian affair” only as no other user outside the European country has reported seeing the new payment button as at the time of writing this.

The payment button works the same way with what we have on Facebook Marketplace where buyers are allowed to send payment request and then wait to be accepted. There are talks pointing towards the use of a brand-new currency, which we suspect to be Facebook Coin.