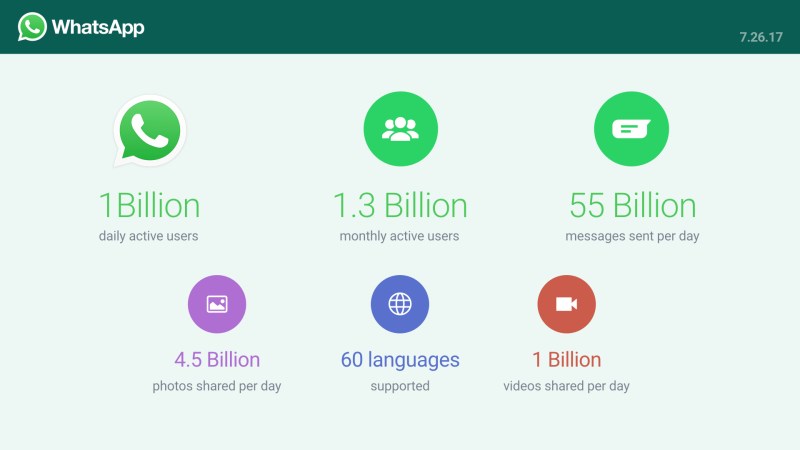 14 billion dollars sounded like a huge amount to pay for a chat app three years ago—now it looks like a big bargain. With 1 billion daily active users, WhatsApp has evolved into one of the most-used chat apps in the world today.

This, indeed is a big milestone, and in fact one of the most significant in the company’s history.

“Today, we are excited and proud to share that one billion people around the world use WhatsApp every day to stay in touch with their family and friends,” WhatsApp announced in a blog post.

2016 turned out to be one of the most eventful years for the mobile chat app as it edged several other chat apps. WhatsApp added a couple of highly-sought after features including, video calling, two-step verification, animated GIFs, and a couple of others. It got even better for the app as Apple announced that WhatsApp was the most downloaded free iOS app.

It was all that a smooth ride for WhatsApp despite being rated the most downloaded free iOS app—the Facebook owned app was heavily criticized for coming out with plans to pass on users’ information to its parent company. This didn’t go down well with a lot of people who felt the company was going against an earlier promise not to do so.

“Respect for your privacy is coded into our DNA, and we built WhatsApp around the goal of knowing as little about you as possible,” the privacy policy read.

UK privacy watchdog, one of the groups that criticized the company for coming out with such plan, said in a statement:

“The changes WhatsApp and Facebook are making will affect a lot of people. Some might consider it’ll give them a better service, others may be concerned by the lack of control.

“Our role is to pull back the curtain on things like this, ensuring that companies are being transparent with the public about how their personal data is being shared, and protecting consumers by making sure the law is being followed.”

You would expect the fortune of the company to nosedive following that decision [to pass up data to Facebook], but that was not the case. With more than 1 billion active users across multiple platforms, the chat app continues to grow in popularity.

Alongside other popular apps like Face Swap Live, Minecraft and Candy Crush Saga; WhatsApp’s dominance is beyond doubt.

WhatsApp recently announced that it was looking to hire a “lead product development” person. Apparently, this is the clearest indication that the company is working towards opening up its app for ads and other business related services.

The job for the position of a lead product development is one of three positions the company is hoping to fill in the coming weeks, and this at best gives us a clear picture of WhatsApp’s plans.

Citing a source familiar with the matter, Recode reports that WhatsApp’s focus is on creating something for the emerging markets. The chat app is particularly very popular in countries like Brazil and India—and WhatsApp’s emphasis on hiring someone with international and prior experience in related field all but confirms this.