Facebook is a social networking site originally created by Mark Zuckerberg for college students. Yet two centenarians are making their case as the world’s oldest Facebook user among one billion that use the site at least on a monthly basis.

First on the list is Florence Detlor of California, 101 years old and officially recognized by Zuckerberg himself, along with Sheryl Sandberg, the company’s COO, as the oldest Facebook user. 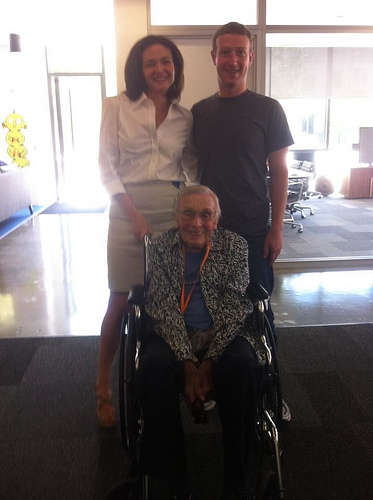 Florence Detlor is officially Facebook’s oldest user, but a much older contender is trying to replace her in the record books. (Image: EXAME.com (CC) via Flickr)

Detlor even got the chance visit Facebook’s Palo Alto campus and go on a personal excursion.

Another centenarian that claims oldest Facebook title is Maria “Mary” Colunia Segura-Metzgar from New Mexico. She just turned 105 last Tuesday, and her Facebook apge has 86 friends.

Anthony Segura, Mary’s grandson who is 60 years old, signed her up but said had to take a few years off her real age because the site won’t accept her birth date. Facebook now registers Mary at 102 years old when in fact she is 105, according to Segura.

Segura said that they have contacted Facebook, and ABC News has tried to help as well, but Facebook has not responded yet. He said that the reason why they let “Grandmother Mary” join Facebook was “to let everybody know in the family that she’s still alive and kicking.”

Furthermore, Segura is responsible for limiting the friends of her grandmother to include just friends and family, which is a harder task than it seems because of the many curious Facebook users who want to add her as friend.

Florence Detlor has had to deal with the same problem as well, especially after the publicized visit to Zuckerberg’s office at Palo Alto.