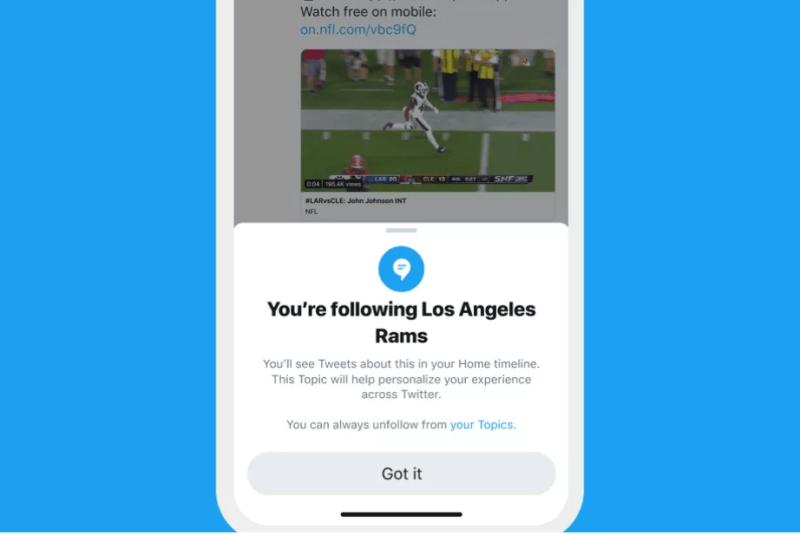 In the last few years, Twitter has tested quite a number of new features—some were dumped before they ever hit the limelight, while some went ahead to become users’ favorites. Truth is that some of these features have indeed been underwhelming, but Twitter continues to test and launch more features regardless. In keeping with its tradition of putting its users first, the microblogging company has rolled out a new feature called “Topics.” Topics allows you to follow subjects automatically in the timeline.

There are times when you feel like you could just read some particularly interesting tweets—tweets based on certain subjects. The question is: how do you get to find the right account that tweets such? Topics is the perfect answer—it helps you to choose from an array of subjects including sports, entertainment and gaming to follow. The feature works same way as when you choose and account of interest to follow—just that you follow subjects instead of accounts. With Topics, you will be presented with tweets from accounts that you do not follow but have credibility on these [300] topics.

For a first time user, Topics is a great way to start. It helps you find your bearing—connecting you with the right account by subject. “We know that the main reason that people come to Twitter is to keep up on the things that they’re interested in,” said Rob Bishop who leads Topics team per The Verge. “The challenge is it’s really quite difficult to do that on Twitter day to day.”

Topics is due for official release on November 13—and this time around it is a global roll out. What that means is that the feature will be available for all users starting from that date. Topics is a brilliant idea, but one that is still evolving; and good thing is that Twitter acknowledges the fact that it is a work in progress.

“As with any machine learning problem, we learn the most from putting this in customers’ hands, and seeing what they engage with so we can build better models,” Bishop said. “Our goal is to get this out as quickly as possible and get people using it so we can improve our algorithms.”

Last month Twitter confirmed that it had begun testing Topics on three fronts—Android, iOS, and the web, but did not give an official when it would be available.

The social media giant recently announced that more than 50 percent of tweets identified as abusive are now being flagged by its automotive moderation tools before reports are made by users. The microblogging giant said it has recorded improvements in its machine learning model for identifying tweets that are problematic for faster moderation.

According to the social media giant, its automated flagging has grown from 45 percent of all abusive tweets last quarter and 38 percent the quarter before that. However, this does not represent every abusive tweet on the platform.