Twitter to unlock eligible accounts locked due to age restrictions 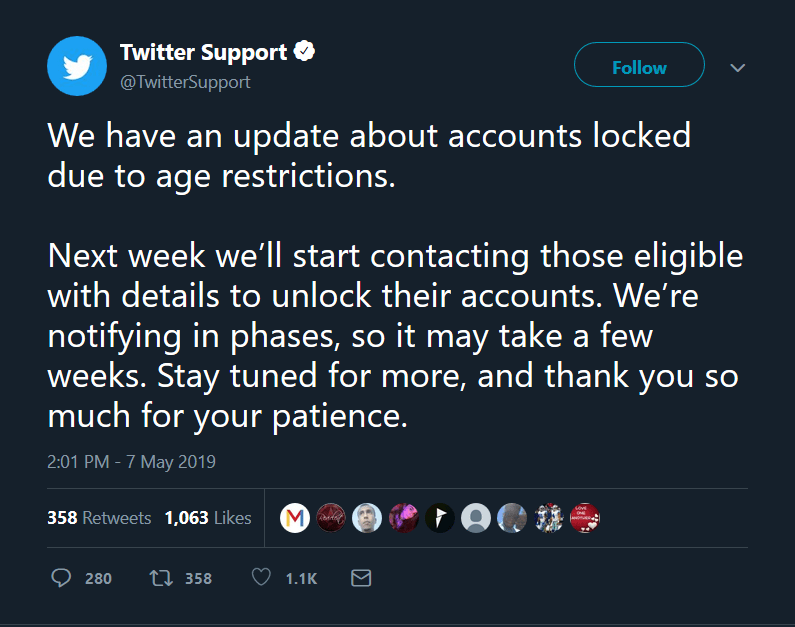 Twitter said it would start contacting all those whose accounts were locked due to “age restrictions.” The microblogging platform said this in a tweet on Tuesday—and this will likely bring relief to those affected by Twitter’s action.

Though, some users had since moved on with some opening new accounts, the piece of information will no doubt gladden the hearts of those who are still hoping that one day the embargo on their account will be lifted.

In case you are reading this, and you feel you have been unjustly locked out of your account due to age restriction, then this might be of interest to you. It is funny though that Twitter chose to break the news via its platform, those affected will still get informed all the same.

“We have an update about accounts locked due to age restrictions. Next week we’ll start contacting those eligible with details to unlock their accounts. We’re notifying in phases, so it may take a few weeks. Stay tuned for more, and thank you so much for your patience,” the company said in a tweet on Tuesday.

In other Twitter news, the social media giant has expanded the ability to report misleading tweets also known as fake news by adding a new tool. The new tool is coming ahead of the forthcoming Lok Sabha in India and the EU elections. That said, Twitter expects that its latest addition will be extended to other places where elections will be held in the future in order to reduce external or undue influences.

“Today, we are further expanding our enforcement capabilities in this area by creating a dedicated reporting feature within the product to allow users to more easily report this content to us. This is in addition to our existing proactive approach to tackling malicious automation and other forms of platform manipulation on the service,” a blog post by Twitter Safety wrote.