Twitter rolls out “lights out” darker mode that saves your battery 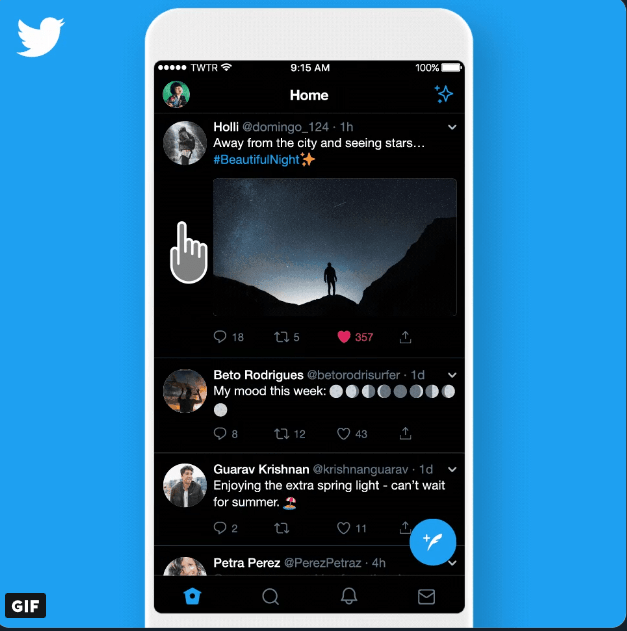 One of the many features heavily requested for by users the last time they had the opportunity to dialogue with Twitter CEO Jack Dorsey was a darker mode. The microblogging company has delivered on that promise and has launched a darker mode called “lights outs.” Lights out was launched on Thursday by Twitter on iOS with no exact words or date when it will be available on Android.

The battery saving feature was announced via the company’s Twitter page, and from available GIF posted on the handle, it does make the app very attractive. Darker mode, which most of us would rather choose to call it, is already rolling out on iOS, and could be available as early as today for all users.

Twitter users will be very delighted to welcome lights out considering the fact that modern iPhones come with OLED screen, which is not usually friendly with the battery. It drains the battery very fast, and being able to use apps with dark mode or even Twitter’s new darker mode will be highly appreciated by all users.

That said, the health benefit to the eye is one of Twitter’s biggest selling point when it comes to lights out.

In 2016, Twitter launched dark mode to enable its millions of users tweet even when the light in the environment where they are is low.  The feature caught up pretty fast with millions of users, and after a while, the request for a darker mode started gathering pace.

It was dark. You asked for darker! Swipe right to check out our new dark mode. Rolling out today. pic.twitter.com/6MEACKRK9K

In other Twitter news, the microblogging platform has confirmed that it is working on a “Hide Tweet” feature. Hide Tweet, which was confirmed per TechCrunch will give users another option to protect their conversations. The feature was first spotted in a Twitter code, and is available from a list of moderation choices that appear when the “Share” button on a tweet is clicked. The “Hide Tweet” feature works as an alternative to muting or blocking a user; though it still gives you the option to control a conversation.

More than anything else, the real reason why Twitter is working on this feature is so that your conversations can be protected. Twitter Senior PM Michelle Yasmeen Haq in a series of post, explained more:

People who start interesting conversations on Twitter are really important to us, and we want to empower them to make the conversations they start as healthy as possible by giving them some control.

We think of conversations as an ecosystem of different groups: authors, repliers, the audience and the platform. We try to balance the experience across all four groups, and we are continuously exploring ways to shift the balance without overcorrecting.