“We’re very pleased to release Digits login for web today. It’s a new way for you to enable phone-based login for your mobile apps’ websites,” the company announced on Wednesday.

The new feature is a standalone app, with insiders reportedly comparing to Vine, which though, distinct, but also related. The interface will also look familiar with anyone who has enabled two-factor authentication to log into their account, reports Venturebeat.

The feature was first announced by the company back in October; but today’s announcement provides further information on how it works. The company had while announcing the app last October said is sees users as vital to “most apps.”

“Users are central to most apps: all those people who play a game and tracks their high scores, create 6-second videos to share, order a burger and fries for pickup,” Twitter said.

The process is easy, but you will have to enter a confirmation code, which will be sent to your handset. This code will only be sent once when you are using the new method. Developers however, won’t be able to add Digits to their websites immediately, but the company did say the framework is already in place. 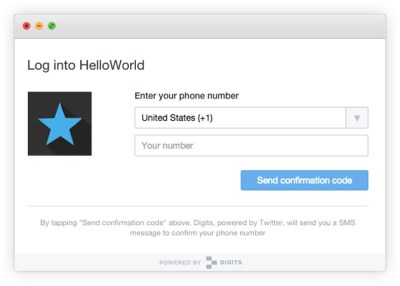 “And we’ve made the login flow incredibly simple so users can easily complete the process. When they log in on web for the first time, they first receive a confirmation code via SMS on their phones, which they just type into the same browser window to complete the flow.”

Twitter also announced that Digits “doesn’t force you to deal with the complexity of OAuth.” However, you will have to include its JavaScript in your web app before installation.

“Unlike other web login services, Digits login for web doesn’t force you to deal with the complexity of OAuth. To install, simply include our JavaScript SDK in your web application, and attach it to your login button of choice. Our library is cached, self-contained and minimal in memory footprint; you do not have to include any other third-party libraries. And as we release new features, our SDK will auto-update without ever breaking your site.”

Twitter’s ‘Digits’ is the company’s plan to push for more product development within the network.