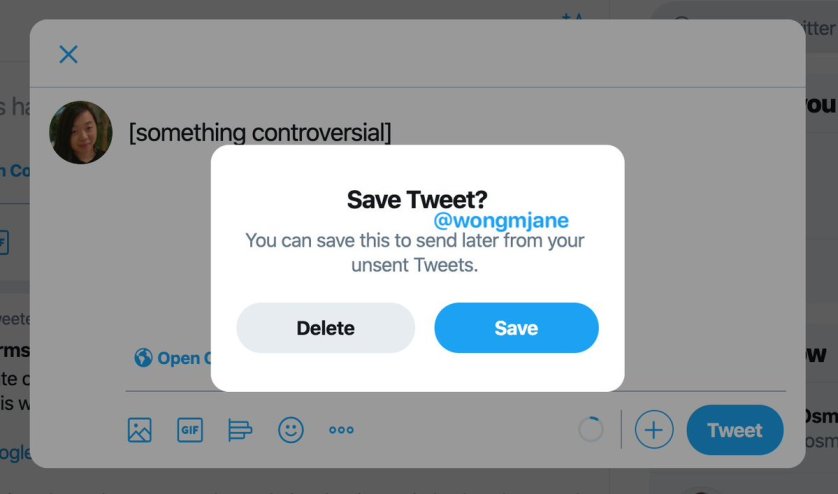 Finally, it seems we are going to have a feature that enables us to save our tweets to be posted later. This, according to reliable reverse engineer Jane Manchun Wong who took to her Twitter page to post a screenshot she spotted lately.

According to the screenshot posted by Jane, Twitter will allow you save a tweet that can be sent from your unsent tweets. This is a very interesting one to look forward to considering the responses that followed Jane’s post. Besides, ability to save tweets as drafts have always been on the priority lists of most wanted features by Twitter users.

All things being equal, the feature could be launched or added soon—helping you to save a tweet as draft that can later be posted. The ability to save draft along with tweet scheduling are among the most requested features from users. Should the microblogging platform pull this one through, then millions of users can cross out the feature from their wish list.

Twitter is working on making draft tweets available on the web app, and cross-device pic.twitter.com/Q5wiYq3ICW

Last November, Twitter announced that a test that may ultimately lead to the launch of a scheduling feature was being done. Though, the feature is still at the experimental stage, users are nonetheless excited about it.

When launched, scheduling will save you a lot of time, and enable you to focus on developing more content that can also be published at a later date. For online publishers and marketers, the feature allows for proper managing and organizing of activities.

Imagine if you had to publish or share your content on Twitter to different groups of followers who live in different continents? Scheduling allows you to do that—setting different publishing time for every tweet, so you can go ahead and focus on other things. For now, only a handful of lucky users have access to the feature, and their feedback will go a long way to help mold the feature into what we all want it to be.

Just last week, Jane tweeted that the social media giant was testing a new feature. Conversation Controls, according Jane Manchun Wong a reverse engineer, is now being tested and could be available once all tests have been completed.

So, what does Conversation Control do? The feature will allow you to control who can reply to your tweets. It sorts of allow you to have a closed-group of select individuals based on default options that can reply to your tweets. Twitter included three options including: Open, Community, and By Invitation. These options could however, be changed before proper roll out seeing that this is just a test.

This could be another way Twitter wants to control or reduce trolls on its platform. Sometimes someone tweets a reply that has nothing to do with your tweet simply for the purpose of trolling you. Limiting replies to your tweets by invitation or to your community could fence out people whose contribution may not be of paramount interest to the topic being discussed.