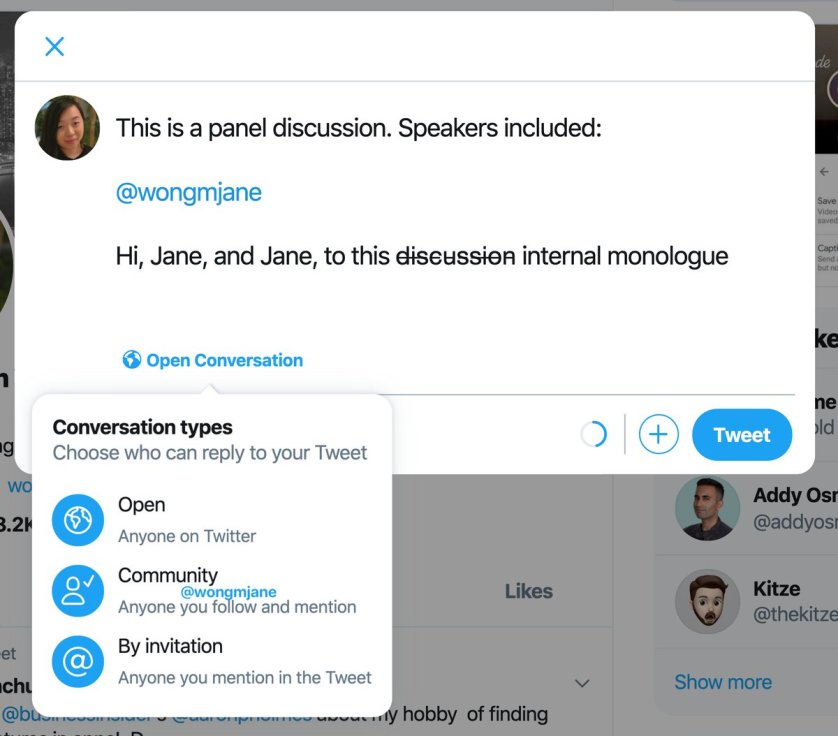 Being able to control who can reply to your tweets could be Twitter’s next big feature that could be out soon. Conversation Controls, according Jane Manchun Wong a reverse engineer, is now being tested and could be available once all tests have been completed.

From Jane’s screenshot, Twitter has included three options including: Open, Community, and By Invitation. These options could however, be changed before proper roll out seeing that this is just a test.

This could be another way Twitter wants to control reduce trolls on its platform. Sometimes someone tweets a reply that has nothing to do with your tweet simply for the purpose of trolling you. Limiting replies to your tweets by invitation or to your community could fence out people whose contribution may not be of paramount interest to the topic being discussed.

Twitter is working on implementing Conversation Controls in the web app pic.twitter.com/DHQfHbxJt1

That said, there is nothing wrong when a topic is thrown open and everyone allowed to tweet their response. To do this, however, you may opt to use the open option which gives access to all users.

Still on conversation-related topic, Twitter has announced that threaded conversation is now available; but is currently only on the iOS version of the app for now. You might not need to update the current version of your app for now as it seems like one made on Twitter’s end. Prior to this change, the threading feature on the app does a poor job of differentiating between standard tweets and replies.

You will begin to see a bold line between a parent tweet and the replies. Replies can now be identified clearly by the series of vertical and horizontal lines. What this does is to make your Twitter conversations look more effectively like thread of connected notes.

“We’ve given conversations a makeover on iOS. When people you follow are in a conversation, you’ll see their replies in a new way in your Home timeline,” Twitter said in a tweet.

The new change makes it easier to see who is replying to who, so you can join in any conversation you are interested in. Twitter is one of the first places that comes to mind when you are looking to get breaking news. However, following conversations on the microblogging platform is not much of a fun for a lot of people. That however, will change with the threaded replies, and hopefully it comes to Android pretty soon.