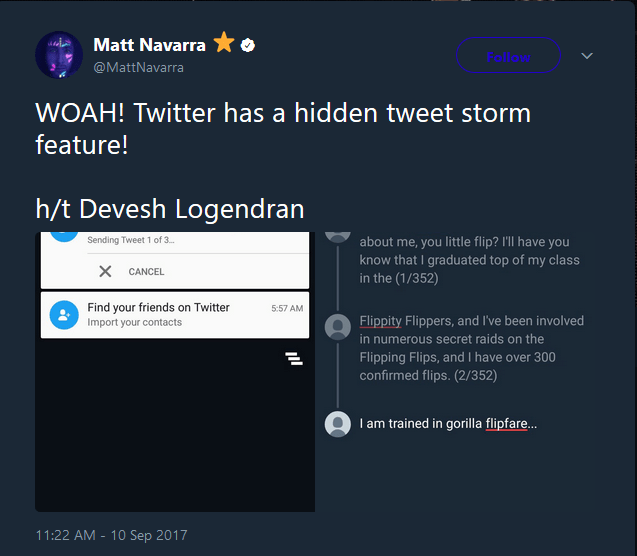 A screenshot taken by Matt Navarra of TNW has revealed that Twitter is testing a new tweetstorm feature that will let you plan your tweet. before posting them. Just to refresh your memory a little and to bring you up to speed with what tweetstorm is all about, it is a thread of tweets that follow similar topic on Twitter. You can create a topic that enables others to join in a conversation or simply put, it’s a chain of conversation.

Twitter feels it could make tweetstorm easier for people to arrange their tweets. The new feature being tested by the microblogging platform, could even add more fun to the way you arrange your tweets and make it easier to launch a conversation.

The new feature being tested by the company was shared by Devesh Logendran, a Twitter user, and appears to automatically split text into individual tweets and appending a tweet count at the end, TNW reports.

Will Twitter finally get rid of its “rigid” 140-character limit policy that heavily hinder users extending the length of their tweets beyond certain limit? This is anyone’s guess, but getting rid of its 140-character limit will be one of the best gifts the microblogging website could give to some if not most of their users that have been clamoring for its removal.

The feature is still being tested and no official statement has been made by the company yet. However, the feature might change a lot of things on how chains of tweets are posted on the platform in the coming weeks.

Last week Twitter rolled out its much-loved dark mode to desktop after successfully testing the web version for weeks. The test came on the heels of a mobile version that was launched in July 2016.

Night mode as you already know, is a feature that makes it easier to read tweets in the dark without leaving a strain on your eyes. The feature gets rid of any traces of white from the app, replacing it with a dark gray. The result of the change is not only good for the health of your eyes, but makes the app lovely to see.

The dark-themed Night mode, which is also available on iOS and Android versions of the app, will enable read and monitor real-time updates from your Twitter timeline same way it’s done on mobile. The desktop version of night mode looks like a dark navy—and not actually black or gray.

To activate the night mode—and that’s if it’s already available to you, simply click on your icon in the top right hand corner of the Twitter interface and tapping the ‘night mode’ toggle at the bottom of the menu that pops up.

The Night mode feature was first rolled out to Android users in July 2016, and instantly became popular among many users. This was shortly followed by the iOS version, which again was a huge success just like the Android version.

You can drop your comments by using the comment box below if you have anything to add to the story above.