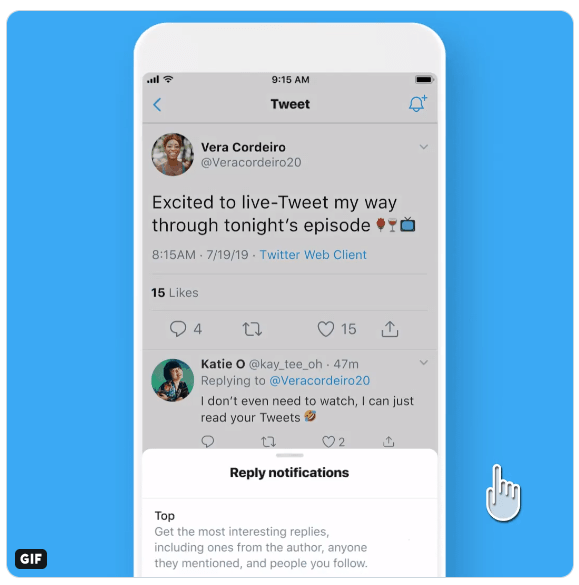 Twitter is making it more exciting and more accessible to use its platform. In recent months, it has been testing features that make discussions on Twitter to be easy to block, follow or join in.

In its latest move, the company announced that it is testing a feature that lets users subscribe to replies to an interesting tweet that they wish to follow. In that way, they will know how the discussion advances.

You probably have notifications on for your must-follows. Now you can get notifications when there’s a new reply to a Tweet you’re interested in! We’re testing this on iOS and Android now. pic.twitter.com/MabdFoItxc

This feature will complement the notifications feature that you have enabled for must-follow accounts.

Four weeks ago, Twitter started to test a fundamental change to its service by starting the latest “Hide Replies” feature. It allows users to take back control over a discussion they have started. Any outright offensive replies can be hidden.

Just like other social networks, a healthy discussion can be easily destroyed by a group of people who simply cannot say positive things. They will start to make inappropriate hateful remarks.

The goal of this feature is to promote more polite conversation on Twitter. If users would resort to trolling, their replies would be hidden.

However, it will have significant downsides. Users could hide replies that they disagree with. But it would silence other viewpoints, which is in direct opposition to the platform’s goal of providing a platform on the web where every person will have a voice and a chance to be heard.

The latest testing allows users to get an alert if there is a new reply to that conversation. You can visit the tweet directly. This feature is available to users who opted to this new test.

Now, if you have enabled this new feature, you will find a notification bell icon when you view the tweet in your mobile.

After clicking the bell icon, you are given three options. The first one is to subscribe to the top replies. You may also choose to subscribe to all replies. But you do not want to be bothered with that discussion, the third option will help you turn off those reply notifications.

The first choice that lets you subscribe to top replies is nearly the same as the set of interesting replies that the platform has tested but in a different form. For instance, it displayed a microphone icon next to a tweet from the poster to make it easier to spot.

The main goal of this test is to personalize the experience when you participate in Twitter discussions. It showcases what the other users you follow are saying.

The latest test will take things further by allowing you to subscribe to a set of replies.

This is the latest attempt of the platform to fix the problem of communication health. Twitter is also writing tougher rules to fix online harassment.

Some users liked the new feature while others don’t. Most of them simply want an Edit button. In February this year, Twitter’s chief, Jack Dorsey, hinted that the platform might soon add editable tweet. But it is not happening yet. Instead, Twitter chose to test a feature to pause notifications.