Twitter confirms it is testing a “Snooze Notification” feature on Android 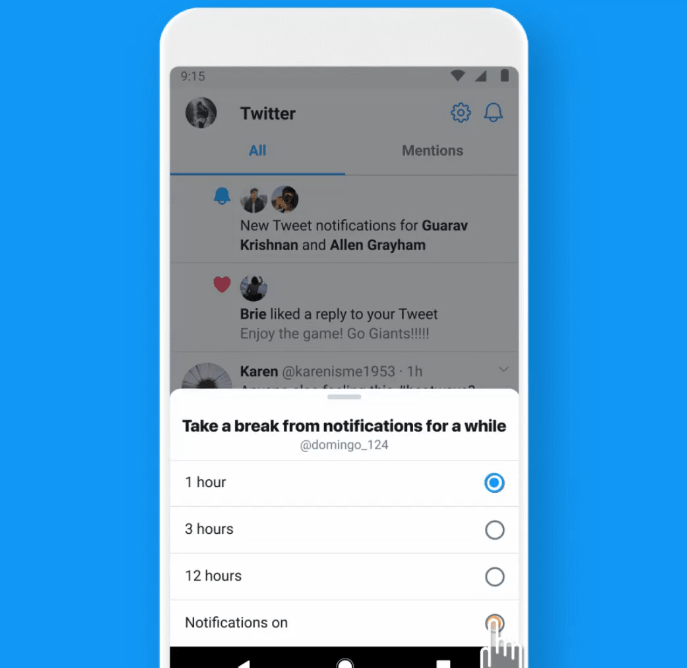 Twitter has confirmed earlier report that a feature that will allow you to temporarily pause notification was on the card. The feature, according to earlier report by Jane Manchun Wong, will let you place a temporary pause on notifications that may come as a result of a viral tweet—and Twitter just confirmed it via another tweet.

“We’re testing a way to temporarily snooze notifications on Android, just in case you go viral at an inconvenient time,” the tweet reads. Seriously, Twitter notifications can sometimes be very annoying—especially at those times when you barely have the nerves to endure persistent interruptions at work.

The snooze notifications feature would help some of us a lot, and I wouldn’t mind being granted access it right away. That said, it might yet be a couple of more days or weeks before we get to see the feature on a wider scale.

You know when someone’s phone goes off in the theater? Or in a presentation? Or at the movies? Don’t be that person.

We’re testing a way to temporarily snooze notifications on Android, just in case you go viral at an inconvenient time. pic.twitter.com/tSuEjlqWDs

Twitter has not said a word about the availability of the iOS version of the snooze notifications feature. However, that may not be far off probably after the Android version is officially rolled out. I mean it is not unusual for social media companies to test upcoming features without necessarily adding versions for other operating systems.

The snooze notifications feature would enable you to temporarily snooze push notifications for 1 hour, 3 hours or 12 hours. Jane reported last week that the feature is currently represented by the bell symbol with a slash across it [just as seen in the image above], and is placed at the top of the Twitter Notification tab.

Another important feature that is also being tested, and could hit a wider roll out in the near future is the ability to drag and drop images. The feature will enable you to re-order multiple attached images in your tweets.