His team launched Friday hundreds of ad iterations to convince Facebook users to petition the app’s ban in the US.

First seen by New York Times reporter Taylor Lorenz, the ads come as the US government threatens to impose a countrywide prohibition on the video-sharing app for its link to China.

The social network nixed an anti-TikTok ad after it included yes and no checkboxes. It violated Facebook’s nonexistent functionality policy. 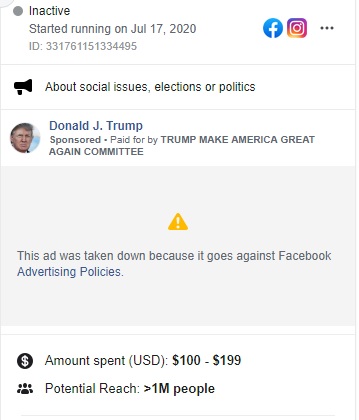 TikTok’s parent company ByteDance is in China. And this has led US lawmakers to question how much control the Chinese government has over its user data and content moderation.

People have grown concerns over the TikTok’s China connection after India enforced a ban against it earlier this month.

The Trump campaign ads say that “TikTok has been caught red-handed by monitoring what is on your phone’s clipboard.”

In March, a research showed how several apps could access content stored on the clipboard of iPhone and iPad users. TikTok was one of them. 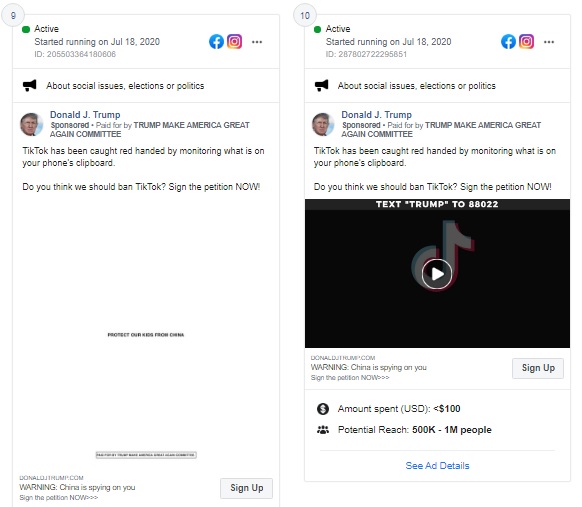 Not only Chinese ties

The Trump campaign did not stop at TikTok. It also sponsored ads against Twitter and Snapchat for “attempting to silence” the US president.

In July, both Trump and his State Secretary Mike Pompeo announced they will consider a TikTok ban in the US.

Since its US launch in 2018, TikTok has successfully dodged calls for investigations from lawmakers and warnings from security experts.

In June, TikTok created a content advisory council to guide policy changes and appointed US-based CEO Kevin Mayer to show its efforts to distance from China.

Apart from its Chinese ties, TikTok also wounded the Trump campaign in a major rally in Tulsa, OK.

TikTok teens and K-pop fans signed up in groups for tickets to the rally. But their attendance fell short in what was advertised as the Trump campaign’s big comeback.

The social media’s effect on the Tulsa rally shows how it has grown into a powerhouse. It is a staple social interaction and internet culture for Gen Z.

TikTok has over two billion global downloads. And an estimated 80 million users are in the US. It beats the likes of Instagram and Snapchat in time spent and new downloads.

The risk of TikTok vanishing from the US has alarmed users and creators in the country. So, rival tech firms are exploiting the chaos to lure TikTok followers to their own platforms.