New Apple chief executive officer Tim Cook has just been given one million Apple shares, a report from The Associated Press reveals. 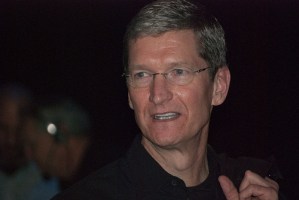 Tim Cook, new CEO of Apple, has been given one million shares of the company. Image: lemagit / Flickr (CC)

Cook has just been named the CEO of Apple by the company’s board of directors after Steve Jobs resigned from the helm of the tech giant on Wednesday.

Jobs said that he could no longer perform up to the standards of what is expected of the CEO of Apple.

Currently, Jobs is reported to be battling an unnamed medical condition.

According to the AP, however, half of the stock will vest in five years while the next half in 10 years.

This presents a big pay day for Tim Cook. The AP, noting that Apple stocks closed $383.58 on Friday, stresses that one million Apple shares is worth $383 million.

However, Cook will have a bigger pay day if Apple’s stock price climbs during his tenure as CEO. Nonetheless, he will also get less if Apple slides while he is running it.