A recent survey conducted by the Pew Research Center’s Internet and American Life Project revealed that 61 percent of Facebook users have taken a break from using the social networking site for various reasons, including getting bored by it and being discouraged by all the “gossip and drama” happening on the site. Others said that they simply don’t have time for Facebook.

Less time on Facebook among users means the company will have slower revenue growth. That is because of most of Facebook’s earned money comes from targeted ads; around 5.1 billion dollars last year.

There are more than one billion Facebook users worldwide, and 618 million sign on a daily basis. Even as users permanently leave the site, more new users come in. Facebook is designed to be a place where people can socialize with their friends, but nowadays, it seems its major functions include the functions of the telephone or the email, and that is because basically everyone is in the site.

Danah Boyd, a senior researcher studying youth culture, the Internet and social media, for Microsoft research, says that the perfect social space hasn’t been found yet. Facebook is the most popular social networking site right now, but Boyd says that “people don’t want to hang out with everybody they have ever met.” 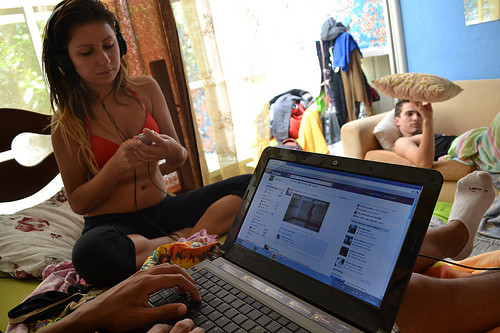 Boyd recalls the era when e-mail was very popular, and that it was the best thing at that time; people rushed home to check their emails and see whether they received the “You’ve got mail” message. Not too many people feel that way anymore about e-mail, and perhaps that’s what will happen to Facebook; an online service which initially got everyone excited but will eventually lose glint as it becomes sort of routine for its users. However, Boyd adds that doesn’t mean Facebook will die soon. Just like e-mail, a tool that still exists right now and is still very important after 20 years.

Boyd says that teenagers nowadays are indeed getting bored with Facebook, but that they will not leave the site in huge numbers. Instead, they will still be using the social networking site, but there passion will be elsewhere.

Facebook responds by addressing several issues which may discourage users from browsing through content found in their home pages. An example is “clutter,” which is a major complain among many Facebook users, as discovered by Jane Leibrock, user experience researcher for the social networking site.

Clutter in the news feeds means that all sorts of content, status updates, photos, ads and links are flowing through users’ news feeds in a kind of chaos, making it difficult for these users to focus and discouraging some of them as a consequence. As such, a Facebook retooling was done last March, separating feeds in various categories, including photos, pages followed, “all friends,” etc.

Teenagers seem to want to see new stuff out of Facebook, as it has become kind of a daily routine to them.