Home » Teardown: Lightning Cable Security Not As Strong As Security For Printer Cartridges

Teardown: Lightning Cable Security Not As Strong As Security For Printer Cartridges

After the first non-apple made Lightning cable went on sale earlier this month, an analysis of Apple’s circuitry for the new connector and cable reveals that it may not have been too hard to crack the new technology.

According to Chipworks which conducted a teardown on the new Apple Lightning Cable, the new connecting cable has security but just not industry leading.

In fact, it pales in comparison to security implemented by tech companies in, say, computer printer cartridges.

“It is actually very interesting that we may have found a chip with (likely) some modest security in this cable. In this case not only related to securing their revenue stream for cables or ensuring reliable and high quality (licensed) peripherals, but in delivering useful product features that are not necessarily in the consumers top of mind. We are planning a full systems analysis on this device to further understand what exactly is going on.

Previously, we have analyzed security devices regarding medical printer media (armbands), printer cartridges, flash drive memory, batteries, and smart cards, but this is the first secure cable we have seen. The security does not come close to the herculean approaches that are used in (for example) today’s printer cartridges, but resembles the level of effort that cartridge manufacturers used to implement in the olden days. In other words, at this time the security is ‘just enough.’” [Emphasis added.]

Nonetheless, the firm says that “With future generations of Apple and non-Apple products, we may begin to see even stronger security and control if the market forces merit it.” 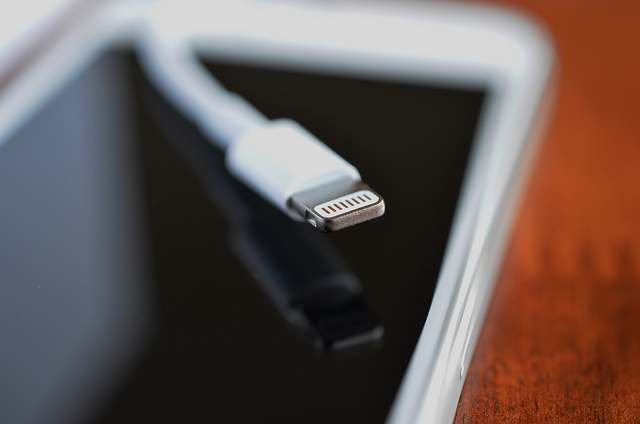 Chipworks also said that Apple has, as expected, simplified the design of the new Lightning connector.

“Part of the magic going on is that the Lightning connector features fewer direct connections than the prior generation connector. This means that Apple needs to apply some intelligence to what wire is sending and receiving the signals because there are fewer connections, but just as much data. Additionally, Apple has a number of patents related to authentication and security between devices. This has useful application by allowing “handshake” access to only certain function necessary for the functioning of a peripheral (such as a speaker docking station) without allowing access to the full functionality of the phone. It has additional application in smart battery applications. Both Apple and Texas Instruments (separately) have documented this security technology in a number of related patents (applied and issued) wherein they describe the passing of information from the host through to the accessory. For those interested, here are a few patent numbers, with the last being a TI patent:  20100173973A1, US8200881, US8239605, US8086781, US8161567, US823881, US8245041.”

Apple unveiled the Lightning connector together with the new iPhone (iPhone 5) and iPod Touch in September.