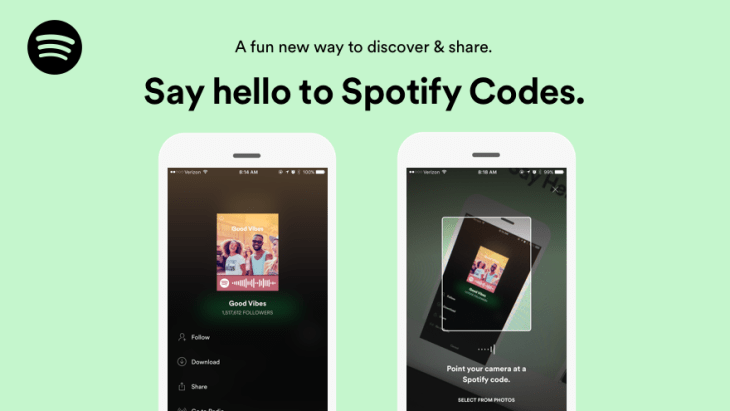 There’s a new feature that Spotify has just launched. Known as Spotify Codes, this latest functionality allows users to share and discover new music easier than before. It allows you to scan a code that directs you to a linked song, playlist or an artist.

For example, if your friend is playing a song on Spotify and you think it’s good, you can scan the song’s barcode through your handset and the app will start the same song on your phone. With that in mind, it shortens the time to play that song on your smartphone. That’s because you no longer have to copy the track’s details and perform a manual search on Spotify.

How to find the code?

Spotify makes it easier to spot the code. While the track is playing, tap the three dots that you see on top of the screen’s display. From there, you’ll find the unique code.

Or you can scan it. To do so, click the search icon located at the bottom of the screen. Then, choose the Camera icon. Be sure that you’ve permitted the app to access your smartphone’s camera. Once you do, you can quickly point your phone’s camera at the code, and it’ll automatically play the song.

It takes a split second for the code to be recognized. When it does, it’ll pull up the track and play it.

The best thing about it is that it lets you share the codes to anyone. Thus, if you found a song and you want your friend to listen to it, simply post a screenshot of the code and share it to your social media account. Your friend can scan them off his tablet display or smartphone screen.

Publications can also use them, and artists can opt to incorporate those codes into their merchandise.

Currently, the Spotify Codes are only found on iOS and Android smartphone apps. They’re not showing on any tablets. During testing, the app could quickly scan the codes. From there, the app will open up the song and play it.

Regardless of this shortcoming, the codes are a great addition to the app’s functionality. They’re useful that bands and artists could use them on their flyers and posters. In that way, their fans could easily scan them when they see their codes.

In March this year, the company announced that it has now 50 million paid subscribers (and counting). Last year, it had only 40 million paying customers. Less than half a year later, it has added 10 million new clients to its list.

It’s a marvelous achievement, and the company has proven that more and more people are liking the idea of streaming music and paying for it. But the company is still waiting for that time when it hits 100 million mark, which was the goal in 2016. Unfortunately, more users still want to use the app for free, despite the ads they see. The challenge for the company is how to convert these users to become a paid subscriber finally.