While social media takes pride as the fastest rising medium for marketers, Social Media Marketing is proud to announce that it has become the largest LinkedIn group under that category.

Social Media Marketing has passed the 500,000 mark (now 516,061) for number of members to be the fastest rising and third largest LinkedIn group, with a week-over-week growth rate of 8 percent. 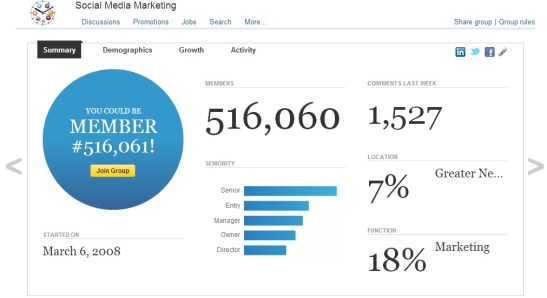 He said the group’s goal is to share tips with marketers on how to take advantage of social media platforms, especially social networks, and successfully hit their target markets.

These specific subgroups have active discussion boards that cross all social media topics, reports, analyses, studies, webinars, guides, and so on.

The Social Media Marketing group began almost five years ago, but it took a while to attract its first 100,000 members.

He said, after reaching the 100,00th mark, the group’s growth started like wildfire, with more than 1,100 new members daily.

He expects the group, managed by his small staff and 48 moderators, to reach the one million members milestone before the yearend.

The group’s success is mostly credited to its careful moderators, who remove spam and keep discussions on topic and relevant.

Crosson said unsuccessful LinkedIn groups are not moderated well enough, or have none at all, which promotes chaotic situations in discussions and shared information.

He said Social Media Marketing is careful to focus only on social media variations and online marketing.

Crosson runs the Social Media Marketing LinkedIn group; SocialMediopolis.com, a private community dedicated to social media marketers; ClickVenture.com, a website on how to make money online; and NewbiesInSocialMedia.com, a site for people new to social media.

The privately held company’s other properties have more than 100,000 members.

Together, Social Media Marketing and SocialMediopolis.com (founded in 2011) have well over 600,000 active members, with claim as the largest social media marketing community worldwide.