Samsung Galaxy S3 Now the Most Pre-Ordered Android Handset Ever 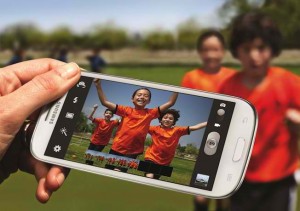 Samsung Galaxy S III is now the most pre-ordered Android handset of all time. (Image: Samsung Mobile, via bgr)

Vodafone has disclosed that the Samsung Galaxy S3 is now the most pre-ordered Android handset of all time.

“We’ve been really encouraged by our customers’ response to the Samsung Galaxy S3,” said a Vodafone representative about the skyrocketing demand for the Samsung Galaxy S3 after the network provider launched it on pre-order status. “With over a week to go until launch, it’s already the most pre-ordered Android device we’ve brought into our smartphone line-up to date and our limited time offer of 2GB of mobile data and 100 free music tracks is being snapped up.”

Major UK retailer Carphone Warehouse had similar remarks as Vodafone and said that it also experienced large demand for the third generation of Samsung’s Galaxy lineup of smartphones.

“The Galaxy S3 is without a doubt the fastest selling pre-order of 2012 so far. We’re gearing up for an exceptionally busy launch day at the end of the month as the handset lands on shelves at our stores across the UK,” said Graham Stapleton, Chief Commercial Officer of Carphone Warehouse.

The Samsung Galaxy S3 touts (or totes) a 4.8-inch AMOLED touchscreen, a quad-core processor, an 8-megapixel 1080p HD rear-facing camera and a smooth stone-like polycarbonate body that purportedly  feels ‘natural’ in the hand. Pre orders for the Galaxy S3 are available on Amazon here.