There are many online services that are similar, just like Pinterest vs. Pinspire. Pinterest pioneered the pin-board social media style, and suddenly became very popular, but Pinspire is also gaining ground.

It’s very difficult to tell what differentiates the two websites, but there certainly are differences that will be pointed out in this article.

Pinterest was first launched two years ago. It received attention when it was integrated into Facebook as an app for Timeline. Meanwhile, a lot of websites joined the Pinterest bandwagon, including Pinspire, which was created by the Samwer brothers from Germany. Critics are saying that Pinspire is an exact clone of Pinterest, but that is not so. 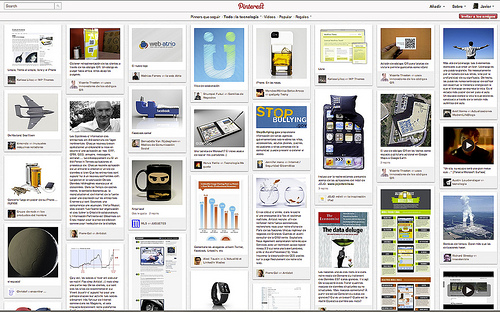 In lieu of the fact that Pinterest started this bandwagon of pin-board social networking sites, it’s advantages will be pointed out in this section of the article.

People are addicted to Pinterest because it combines two captivating social media elements: sharing what you like and visual content. Moreover, Pinterest is a great avenue for people to find styles, brands and products that they can’t see using search engines. For businesses, it promotes brand advocacy and building links.

There are many features in Pinspire that you will not see in Pinterest, and the only aspect copied by PInspire is the layout – which nonetheless is one of the main contributors to Pinterest’s success.

Here are the similarities and differences; Pinterest vs Pinspire.

As mentioned previously, Pinspire copied the layout and interface of Pinterest. Both websites display photos with their corresponding comments and captions in a grid pattern. Both websites also let you start san account using Twitter or Facebook, and what you pin on those sites appear in your other social networking sites as well.

Unlike Pinterest, however, Pinspire displays how many views a certain pin has, which is quite convenient for a lot of reasons. Moreover, you can only get into Pinterest through invites from existing users. With Pinspire, all you need is an e-mail address to sign up and start using the pin-board social site. You can also use Twitter and Facebook to use the site. 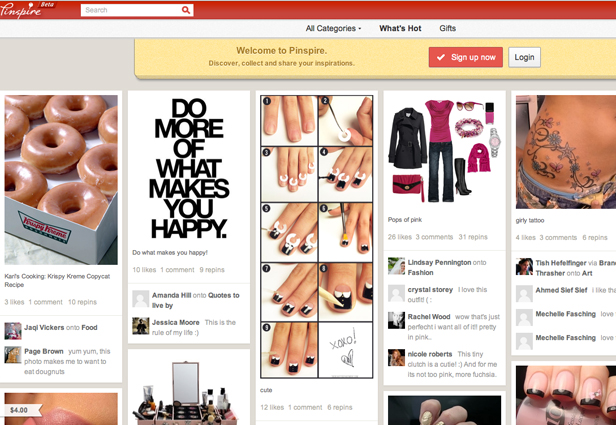 While Pinspire copies PInterest’s layout, it has unique features not seen on Pinterest. (Image: via mashable.com)

For both websites, you can view pins through category networking or through your network. If you like a particular content, you can re-pin it to your own board, or upload your own pins for your network. Content is arranged into pin boards. Pinspire awards points for your activity on their website. Points allow you to participate in challenges for gift cards.

Furthermore, Pinspire is country-specific. For example, if you are in India, a majority of the pins that appear on the home page are associated with India. Logging into the site also changes your URL to represent the country you are in.

For your Pinterest and Pinspire pinboards, you can place bookmarks that lead to your blog or website, increasing referral traffic and increasing the chance of gaining customers.

In fact, you can assign pins as products for both websites, and target them to people who are looking for those products. In addition, its integration with Twitter and Facebook can only help spread the word about what you are doing on your pin-board websites.

In your blog or website, you can put “Pin it” buttons so that your readers can share it for others to see. This feature is available both for Pinterest or Pinspire. In the landscape of social media, these pin-board sites are rapidly growing in popularity. In fact, MarketProfs conducted a survey which showed that Pinterest generates more website traffic than the combination of YouTube, Google Plus, Reddit and LinkedIn. Therefore, Pinterest or Pinspire should be included in your marketing strategy.