Opera Software ASA has launched the latest version of its web browser that, according to the company, will draw in users for 10 reasons, two of which involve non-Beliebers.

The Norwegian software company now offers Opera 11.60, an updated version that touts several new and improved features, which include the ability to bookmark or add favorite websites to the Speed Dial page with the click of a ‘star’ in the address bar.

Opera Software believes that nearly 50 percent of Internet users worldwide have not set eyes or tried a new Web browser other than the one bundled with their computer’s operating system.

Microsoft usually has its own Internet Explorer web browser bundled and installed in every Windows PC while Google’s Chrome OS uses the company’s Google Chrome web browser as default.

To change that, Opera Software encourages people to try other alternatives that are better than what they currently use.

Jan Standal, VP of desktop products at Opera Software ASA, said, “It’s better to give than to receive, so why not give that special someone a new browser. People spend more time working with their browser than they do with their car, so it makes sense to shop around and consider their options. If your best friend drove a Yugo, you’d help them find something else, right?”

Opera Software also listed 10 reasons why it is timely to try a new browser, all of which went through a scientific approach and painstakingly dug into. 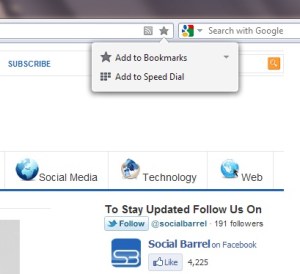 Screenshot of a new feature in Opera 11.60

1. You clean everything to prepare for the holiday, why not your computer?
2. No assembly required; it’s all in the download package.
3. It is free, a deal year-round, rather than a Black Friday doorbuster.
4. Unlike socks, this fits everyone.
5. We tried not to say it, so we misspelled it: IT’S FSAT.
6. Justin Bieber doesn’t use it.
7. It’s supported by science since version 10.
8. Your kids won’t wake you up at the crack of dawn Christmas morning; they’ll be too busy with the browser.
9. See #6.
10. Your current browser is so fat it can’t slide down the chimney.