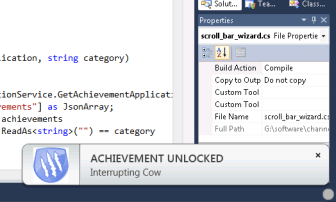 Microsoft has announced today the launch of a new plug-in for Visual Studio suite, designed to symbolically reward the most talented programmers who use this package for developing games and applications. Thus, the achievements, already present in most games for consoles and PCs, are no longer exclusive to users, but to their creators.

In order to do everything by the book, Channel 9, the team behind this plug-in, has also introduced leaderboards, designed to offer opportunities for those who wish to participate in the collection of such trophies to compare their abilities. Obviously, they will not be intrusive, being active only for those who will install this plug-in, but will bring a little socialization into an area in which most would prefer not to be bothered. Achievements will be awarded depending on how programmers write the code itself, or its level of sophistication or how and if the advanced functions offered by Visual Studio are used.

Microsoft offers these achievements only after compiling the code, and the full list of developers, along with the download link, can be found on the official website of Channel 9. Did we mention that they can then be published on Facebook and Twitter?